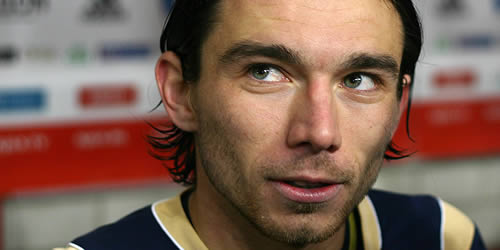 Danijel Pranjic has hinted at a possible move to Everton after the defender was released by Bayern Munich this summer.

The 31-year-old Croatia international has been linked with a move to Goodison Park in recent weeks and says he is expecting “concrete” developments over his future this week.

Pranjic also claims that he came close to a move to Merseyside in January before the deal fell through.

“I am honored that such a successful coach [David Moyes] wants to sign me, and would be honored to play for a club like Everton with such a rich history,” Pranjic told Sportske Novosti.

“We were very close to completing a deal in January, but then Bayern prevented it going through. I can’t say that everything is finished, but next week I’m expecting some concrete developments.

“I’m hungry to play again, to fight with my team-mates for success, to play for the fans. I missed all that sitting on the bench at Bayern.

“I’m 31-years-old and physically I feel perfect. I have reached my maturation point as a player and as a person, and I think I’m capable of producing the best form of my career.”

Meanwhile, reported Toffees target Hugo Almeida has revealed his desire to play in the Premier League.

The 28-year-old Portugal international, who has scored 15 goals in 44 appearances for his national team, was part of Paulo Bento’s side who were beaten on penalties by Spain in the semi-finals of the European championship.

Moyes had been heavily linked with a move for Almeida in January 2009 as Everton struggled to cope with injuries to Ayegbeni Yakubu and James Vaughan.

Almeida eventually joined Turkish side Besiktas in a €2m (£1.6m) deal from Werder Bremen in 2010, but the striker’s admission he wants to play in England has reignited reports that Moyes could move to sign the former Porto forward.

“It is no secret and I’ve said several times,” Almeida told A Bola. “I would like to play in England or Spain sometime.

“I have a contract with Besiktas and I will gladly comply because I have been treated very well, but in the world of football things change overnight and if there is something interesting we will consider it.”

Tottenham Hotspur have made offer for Alan Dzagoev, claims father