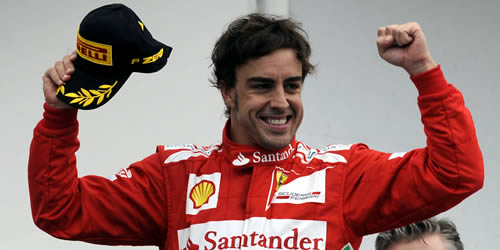 Ferrari’s Fernando Alonso stretched his lead at the top of the drivers’ championship to 34 points after holding off Sebastian Vettel and Jenson Button to win the German Grand Prix.

The Spaniard is the first driver to win three races this season after leading from pole and maintaining his composure to clinch victory at Hockenheim.

“It was tough, definitely,” said Alonso. “I don’t think it was an easy race because maybe we were not the quickest on dry conditions. But we were quite competitive, enough to maintain the lead.

“Also there were some good calls by the team in terms of strategy in the first stop and then obviously in the second stop when Jenson pitted. We had to react, Sebastian and me.

“After that it was a long race, 27 laps to the end with Jenson putting a lot of pressure, but the car was feeling good, so it was enough to keep the lead into Turn Six. And then after that it is not possible to overtake in the last sector, so you try to control the tyres and, a little bit the race.” 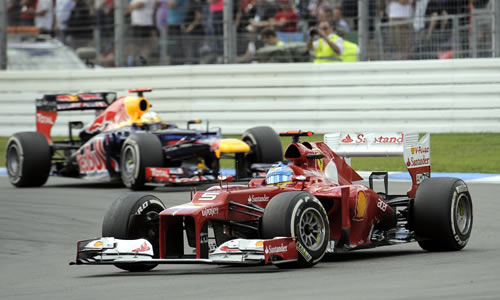 Ferrari’s Alonso managed to hold off defending world champion Vettel, who was demoted to fifth place after the race (Photo: Ferrari)

Defending world champion Vettel passed Button with two laps to go but was demoted to fifth place after being handed a 20-second penalty because race stewards decided the German “left the track and gained an advantage when he re-joined”.

Button said after the race: “I don’t think there’s anything I need to say. You can see the footage and see what you think yourself.”

Vettel, meanwhile, defended his actions but accepted the penalty. “I wasn’t sure where he was,” said the Red Bull driver. “I couldn’t see him in that moment, so decided to give enough space and went off line on the slippery paint and I was able to stay ahead and get past him.

“The only intention was not to crash and to give him enough room. I have respect for him and I didn’t want to squeeze him. It was good to be on the podium at the home race, but I have to respect the steward’s decision.” 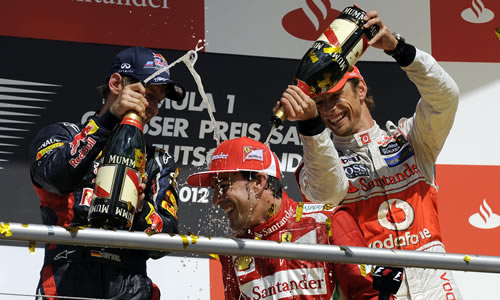 Button was rarely more than a second behind leader Alonso but was unable to close the gap on the Ferrari driver.

“It was a close race and I couldn’t quite get Fernando at the end,” he said. “When you are in the middle of three you really have to fight and I was pushing a little bit more in the early part of the stint, whereas when you’re in front you can coast a bit in the bits where you don’t need to push.”

Lewis Hamilton’s race was severely hampered by a puncture early on and the McLaren driver eventually retired with gearbox damage.

On a high! London 2012 Olympic torch takes ride on the London Eye