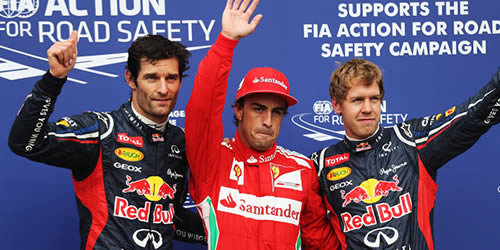 The world championship leader mastered the wet conditions to clock a time of one minute 40.621 seconds, ahead of Red Bull duo Sebastian Vettel and Mark Webber – although the Australian was demoted five places after a penalty.

Mercedes’ Michael Schumacher will start in third place at his home race after qualifying fourth, with his team-mate Nico Hulkenberg finishing fifth-fastest.

Jenson Button qualified seventh with a time of one minute 44.113 seconds, with his McLaren team-mate Lewis Hamilton close behind in eighth – but both will start a place higher after Webber’s penalty for a gearbox change.

“I am very happy,” said Alonso, who secured pole for the second race running. “When qualifying is run in these conditions, it’s very difficult to put together a clean lap and it’s very easy to end up in the grass, the gravel or in the wall.

“It’s something of a fight for survival: before anything else, you have to get to the end and then look at where you’ve finished. 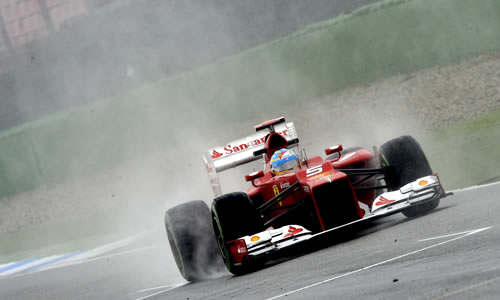 “Then, when you hear on the radio that you’ve got pole, it is extremely satisfying, because there’s a feeling you really have given your all.

“The car was going well in all conditions, which is encouraging, as it means that we can be in the fight whatever happens, be it dry or wet.”

Ferrari team principal Stefano Domenicali was full of praise for the Spaniard’s composure in difficult conditions, with the rain intensifying in the second qualifying session.

He said: “Once again, Fernando has demonstrated just how talented he is. Here, as at Silverstone, the rain played its part in the qualifying session and it was not easy to manage the evolution of the track conditions.”

Webber, who will start in eighth place as a result of his penalty, is still confident he can challenge for a podium finish in Sunday’s race.

“It was a very intense, tricky session for the drivers and engineers,” said Webber. “It was a challenge for us. Sometimes to be in seventh gear wasn’t possible, to use the Kers [power boost] wasn’t possible. When you have wheelspin at 180mph it certainly gets your attention.

“But I was happy with my lap, I’m happy to be up here and from eighth we can still have a very good race.”