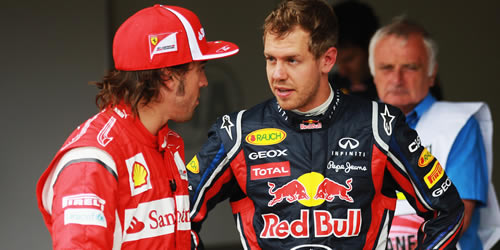 Sebastian Vettel admits he is “honoured and flattered” by reports linking him with a move to Ferrari – but insists that he has not signed a pre-contract agreement with the Italian team.

The German Red Bull driver has been the subject of speculation suggesting he has already agreed to join Ferrari for 2014.

But although the double world champion says any driver would find it hard to turn down a move to the Maranello-based outfit, he refused to rule out staying at Red Bull for the rest of his career.

“I am honoured [team principal] Stefano Domenicali and [president] Luca di Montezemolo see me as a Ferrari driver,” Vettel told Bild ahead of his home race at Hockenheim this weekend.

“Clearly I’m flattered, but the truth is there has been no signal from me, I’ve not signed anything, nor agreed anything with a handshake.

“But if you asked the 24 drivers in Formula 1 if they would like to go to Ferrari in their career, all 24 would say ‘yeah, clearly’, and it is the same with me.

“It is simply an awesome race team. But it [a move] has to fit on all sides. Who knows, maybe things change and suddenly I go somewhere else, or it may be I never go anywhere else in my career because there simply is no better package than Red Bull.”