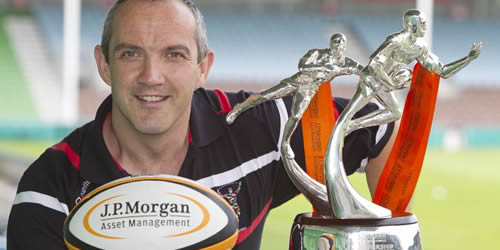 Conor O’Shea wants the Harlequins players he selects for the J.P. Morgan Asset Management Premiership Rugby 7s Series next Friday to give him a selection headache ahead of his side beginning the defence of their Aviva Premiership crown come September.

The Quins director of rugby will pick a blend of youth and experience as the club take their first step on the road to the title on Friday 13 July, taking on Saracens, London Irish and London Wasps at the Twickenham Stoop in the first leg of the Series that culminates in the Final at Bath on 3 August.

O’Shea is keen to test some of Quins’ young talent in a pressure-cooker situation, who are being honed by academy head coach Howard Graham, a former England 7s captain himself, as future stars of the club.

And he is sure those selected will take a lot from the competition and be determined to make their mark when it matters most.

“We have got a lot of young players who want to go out and prove a point,” said O’Shea. “We are going to blend that youth and experience quite nicely.

“It is a great development tool. It tests your skills and Howard Graham is a great exponent of that.

“We will structure them as best we can so they can represent the club in the right way. We are all looking forward to it.

“The young guys will really learn alongside the more experienced players.

“I’m not hoping they will give me selection headaches come September – I know they will.

“They will be getting great first-hand experience of what it is like playing in front of a packed stadium and it will test how they deal with that pressure.

“We want them to enjoy themselves, be competitive and see where they are. Not winning it won’t mean we are no longer a winning side.”

O’Shea’s men face traditional Double Header opponents London Irish, London Wasps and Saracens in Pool A, with the top two in each of the three pool stage groups going through to the final at Bath’s Recreation Ground on Friday 3 August.

And Quins No8 Nick Easter believes it will be a good chance for those selected to show O’Shea just what they can do.

“It is a great opportunity for Conor and the coaching staff to see how they perform under pressure and see how their skills react in tough situations,” he added.

“They will be focusing on performance rather than results because otherwise you can take your eye off what you want to achieve.

“Skills under a pressure are a big thing for us. When you come to Premiership games where it means a hell of a lot more the result of the game can go either one way or another with a drop goal. They will be learning how to deal with that.

“It will be great for these players to play in front of a packed Stoop and live on television. It could be the biggest games some of them have ever played.

“It’s a great breeding ground for Harlequins and England. Luke Wallace and Ross Chisholm came through well last year, and obviously Ollie Lindsay-Hague who is playing for England.”

The J.P. Morgan Premiership Rugby 7s Series kicks off on 13 July at Harlequins, with rounds at Sale Sharks and Gloucester Rugby, and the final at Bath Rugby. Visit: www.jpmorgan7s.com to find out more.