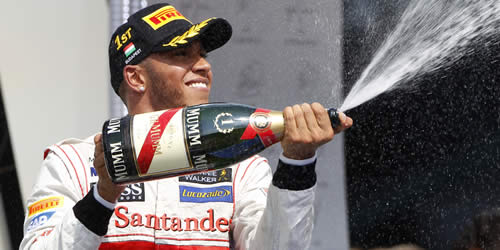 Lewis Hamilton insists there is still “all to play for” in the race for the world championship title after the McLaren driver sealed his second victory of the season at Sunday’s Hungarian Grand Prix.

The 27-year-old led from pole to flag in Budapest to finish ahead of Lotus duo Kimi Raikkonen and Romain Grosjean and move up to fourth in the drivers’ standings, 47 points behind leader Fernando Alonso.

“We’ve still got a good gap. Fernando and the Lotuses are really quick, the Red Bulls are still quick, we’ve got to keep working,” Hamilton said.

“We’ve got to now take a step back and know that we’ve got to do some work; we’ve still got to improve but we’ve proved this weekend that it’s still all to play for.”

There is now over a one-month break until Formula 1 returns with the Belgian Grand Prix on 2 September, and Hamilton hinted that this would be a good time to sort out his future at McLaren – but insisted there is no rush.

“We’ve got this summer break, we’ll see what happens,” he continued. “But again, we’re in no rush, we’ve got to just focus; the most important thing is this win.

“The guys wearing the [victory] tops, back at the factory, this is a boost for them to know that they’re on the right path.

“But I hope this spurs them on knowing that we can challenge for the win this year and both us drivers are on it. So let’s all remain on it.”