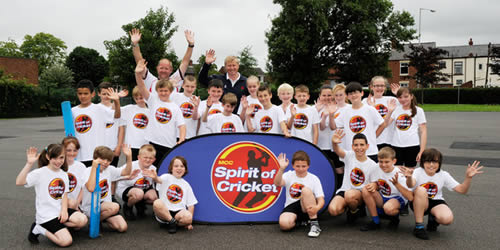 Lancashire captain Glen Chapple spoke to Henry Cowen at St Anne’s Catholic Primary School in Leyland, where he was helping to promote the ‘play hard, play fair’ message of MCC Spirit of Cricket.

In addition to the important work he was doing for Chance to Shine, Chapple spoke to All Out Cricket magazine about a frustrating season to date and the challenge of captaincy.

So tell us a bit about your involvement with Chance to Shine?

I’ve done a few Chance to Shine cricket days at schools, this is the first one which is actually a school assembly as well. The lead coach Mark takes the kids through the Chance to Shine initiative, their aims and objectives – teaching the kids to play fair, what it means to respect the rules of the game, to respect the umpire and the importance of shaking hands at the end of the game. The kids have absolutely loved it. After the assembly we played KwikCricket in the yard and obviously the aim is to teach them the right way to play sport.

In terms of events on the pitch, how would you assess Lancashire’s season so far?

We’re obviously disappointed with the start we had. We played some good cricket and we didn’t capitalise on those strong positions for various reasons. We lost a lot of time to weather, as have many have sides, which is really disappointing. The most disappointing thing about the season in general, and I’m not just talking about Lancashire I’m talking about all sides really, is the weather. Twenty20 is the same; we lost four games but two of them we were in a really strong positions and then they’ve been seriously rain-affected.

Is the title of defending champions making life harder in the four-day game?

It would be difficult to use that as a reason but, as I say, we’ve played some good stuff. We’ve played well over the last few games but unfortunately we’ve only managed to win one. But we’ve lost something like 1,100 overs, which is an awful lot of cricket. We’re not using that as an excuse, we haven’t played good enough cricket to be at the top of the table and that’s what we’re looking to do in the remaining seven games.

You played the majority of your home matches at Liverpool last season, where you enjoyed a lot of success. Would you say the move back to Old Trafford has hindered the side at all?

No, we’ve split the games so we’re playing four at Liverpool and four at Old Trafford. We played Nottinghamshire at Old Trafford and we were in a really commanding position and unfortunately they played really well to get themselves back in it and we lost that game. It’s difficult to put your finger on it, the effort from our lads has been great but sometimes in cricket things don’t go your way. We’re aiming to show that it’s the way you bounce back that counts. We knew at the start of the season that just because you’ve won the Championship doesn’t necessarily mean you’ll be at the top next year. There are nine good sides in the division, and it was always going to be tough. But there are seven games left and we’ve got every reason to believe that we can make a push to get up the table.

We’ve touched upon the success you enjoyed last season, captaining the side to the County Championship title. Why do you think there are so few bowling captains?

There are issues with being a bowling captain. It’s difficult for the bowlers to play all the games, so you would always need a back up, and it can be difficult at times on the field when you’re in the middle or at the end of a spell to maintain focus on the tactical side of things. But in favour of bowling captains, you do see the game through different eyes, and you have a different approach. I’ve really enjoyed it; I’ve enjoyed the challenge of being captain and it’s a job that keeps you busy. I suppose, at my age, it’s something that has helped me maintain my focus on the game.

Your Lancashire teammate James Anderson has spoken of his ambition to lead England and cited you as an example of how effective a bowling captain can be. Is he someone you think would make a good leader?

Jimmy’s very tactically aware, he’s a deep thinker about the game and he absolutely loves playing cricket – they’re the qualities you need. Obviously you need the respect of the lads but that wouldn’t be a problem for Jimmy so I can see him making a good captain. At the end of the day I think what all captains realise is that it’s the team that do the job. You need a good team and you need their full commitment.

You’re often described as one of the unluckiest players to never have played Test cricket for England. Do you feel that’s accurate?

Well, it’s nice to hear when it comes from your colleagues or peers in the game. It’s slightly irrelevant, I think. At the end of the day I’ve had a great career of which I’m thankful for. I’m not too hung up about not playing Test cricket, although it was my ambition. I think it’s for other people to talk about; it’s not something I should really have an opinion on. To have an opinion on it would make me bitter, which hopefully I’m not!

Do you look back on a particular point in your career and think ‘I should have been picked then’?

I think I lost my way a little bit from the age of 22 to about 27. They were the years that I should have been pushing and unfortunately they were the years that I was probably playing my worst cricket. That’s the way I look at it and I think if I had played better cricket in those years – like I played after I was 27 – then undoubtedly I would have had a good chance.

How do you think England will fare against South Africa this summer?

Chance to Shine ambassador Glenn Chapple was helping to promote the ‘play hard, play fair’ message of MCC Spirit of Cricket. Chance to Shine has brought cricket to over 1 million state schoolchildren. The programme costs £5m, or £15 per child, to run each year. To make a donation visit www.chancetoshine.org