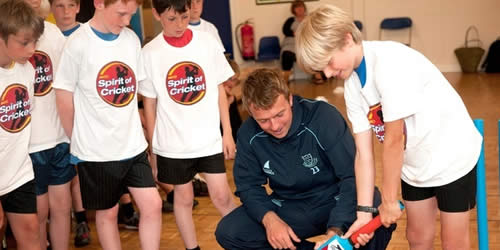 Sussex and England Lions batsman Chris Nash caught up with Henry Cowen at Barnham Primary School, where he was helping to promote the ‘play hard, play fair’ message of MCC Spirit of Cricket.

After an impressive season to date that has seen Nash top Sussex’s run-scoring charts and bowling averages in Championship cricket, the 29-year-old says he harbours international ambitions.

It’s been a positive season for Sussex so far, particularly in the Friends Life t20. Have you been pleased with how things have gone?

Yes, it’s been a great season. It was hard work early on with all the rain and that made the pitches a bit juicy for us openers, but Twenty20 has kicked off really well for me; a couple of fifties and a couple of other scores as well. The team has been playing some brilliant cricket, so we’re full of confidence at the moment.

Is it too soon to start looking towards Twenty20 Finals Day?

Yes, we’ve done that before. We’ve got off to some good starts before where we won eight out of 10 or something like that, so we’d pretty much qualified early on, but then we fell away. We’re trying to learn from that. Obviously this year we’ve had a good start and we just want to keep it going. We’ve got games this week against very strong sides so it’s vital for us to go into the quarter-finals with a couple of wins under our belt.

And things are going well in limited overs cricket in general, with Sussex topping their Clydesdale Bank 40 table too…

Overall in white ball cricket I think we’re unbeaten this year, so we’re going really well. In terms of the Twenty20 what they’ve done with the schedule is much better, allowing teams to concentrate purely on Twenty20 for a month, so our focus has been on that. After the Surrey game on Sunday we go straight into 40-over cricket and the County Championship; so after that we’ll start looking at what’s coming up in the next few weeks.

On a personal note, you’ve had a fair bit of success with the ball this year, leading the Sussex averages in the County Championship. Would you describe yourself as an allrounder these days?

I wouldn’t say I was an allrounder but if you can contribute to winning games as a batter that does a bit of bowling then it’s a massive bonus. It’s something I’ve worked really hard on and something hopefully I can do more of. It’s just nice to be able to chip in, especially in the last Surrey game where I got a couple of wickets, which helped us win.

You’ve been involved with the Lions in the last couple of seasons. Is senior England recognition still in your thoughts?

Definitely, as a county cricketer you’re always aspiring to that. I’m probably entering my prime so if I can keep scoring runs I will hopefully get another chance with the Lions at some stage in the next couple of years. I had a little taste of it last year and the only way you can get into it is by scoring lots of runs for your county.

Does the possibility of international cricket keep you hungry?

It does. You look at the guys playing at the moment; they’re playing some amazing cricket and we’re the top-ranked Test nation. You just need to score heavy runs. Someone like Jonathan Trott just scored mountains and mountains of runs year after year and then got his chance and took it. As county batters we know what we’ve got to do.

Chance to Shine ambassador Chris Nash was helping to promote the ‘play hard, play fair’ message of MCC Spirit of Cricket. Chance to Shine has brought cricket to over 1 million state schoolchildren. The programme costs £5million, or £15 per child, to run each year. To make a donation visit www.chancetoshine.org

London 2012: Robertson admits some sports are set for funding cuts