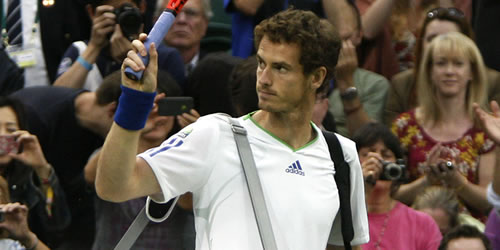 Andy Murray took just under three hours to dispose of the French No1 Photo: Head

Andy Murray has become the first British man to reach the final of Wimbledon in 74 years courtesy of his 6-3 6-4 3-6 7-5 victory over Jo-Wilfried Tsonga.

The 25-year-old completed his four-set win in two hours and 47 minutes to set up a showdown with six-time Wimbledon champion Roger Federer.

Here is a selection of our favourite Tweets from during the semi-final, in chronological order.

Queens Park Rangers midfielder Joseph Barton ‏(@Joey7Barton) reckons it is now or never for Murray: “If he doesn’t get the final this year he’s never getting there!”

But the British No1 surges into an early lead, and former Newcastle United striker Mick Quinn ‏(@mickquinn1089) is impressed: “Murray looking good 4-2 up in the first set!”

As is Norwich City’s Anthony Pilkington ‏(@Pilkington_11): “Wow #Murray is on fire!!”

And Murray wraps it up in superb style. Fluffy Victoria ‏(@fluffygirl3006): “Andy Murray is cruising through first set! It is his!”

But Jase ‏(@_Jason_19) wants Murray to have another crack at winning a Grand Slam final: “Come on Andy Murray be nice to have a chance of winning something!”

Christopher Clarey ‏(@christophclarey) reckons Murray’s place is assured in the final: “Two weak backhand slices from Tsonga and Andy Murray is up two sets to love. One set away from mega-final with #Federer at #Wimbledon!”

Sam Hughes ‏(@Sam__Hughes) tempts fate: “This might be the least stressful Andy Murray match that anyone has ever watched! #Wimbledon”

Former Tottenham chairman Lord Sugar ‏(@Lord_Sugar) sees the final on the horizon: “Second set to Andy Murray. Are we going to see a Brit in the Wimbledon final for the first time in 70 odd years.”

Manchester United defender Rio Ferdinand ‏(@rioferdy5) is backing the world No4: “Come on @andy_murray I want to see you in the final! You’re on fire!”

But Andrew Bowell ‏(@Andy_Bowell) urges Tsonga to raise his game – and he does: “Yeah, Andy Murray’s playing well, but it’s not like Tsonga is giving him much a challenge, step up Frenchy! #Wimbledon”

Hannah Wilks (@newballsplease) remembers Tsonga’s exploits at SW19 last year as Murray loses his serve: “Andy, you can cry like Roger, but you really, REALLY don’t have to prove you can lose to Jo from two sets to love like him.”

And Ewan Hogg ‏(@Ewan_Hogg) reckons it wouldn’t be a Murray match without some tension: “It would be far too simple for Andy Murray to win in straight sets, always makes it difficult for himself!”

A slight bit of comedy in the third set as Murray’s shots hits Tsonga in a sensitive area. Laura ‏(@Laura_Loz): “Murray just hit Tsonga in the balls with the tennis ball! :O Don’t mean to be mean but it was kind of funny :D”

James Andrews (‏@James_Andrews) is critical of the lack of home support going Murray’s way as he loses the third set: “I find it disgusting that anyone from the UK would want a Frenchman to beat Andy Murray, especially in a semi-final @ Wimbledon.”

Tottenham midfielder Tom Huddlestone ‏(@TomHuddlestone6) covers old ground: “Would Tim Henman have had this kind of support in Glasgow (off the Scots), that Murray has at Wimbledon? #justathought”

Susie Lockwood (‏@SusieinNorfolk) is hoping for a dream final: “Yeah! Come on Andy! I would dearly love to see a Murray/Federer final #Wimbledon!”

And Daniel Drave ‏(@danieldrave) urges the Centre Court crowd to get behind Murray in a tense fourth set: “I can’t help but feel that the crowd is torn between @andy_murray and Tsonga.. For god’s sake get behind our British lad #wimbledon!”

Martin Griffin ‏(@mgriffin_86) sums up the emotions of the majority of the British public: “Andy Murray is starting to stress me out!”

Stephen Fry ‏(@stephenfry) doesn’t care about Murray’s mannerisms: “Oh I’m all in pieces. You beauty, Andy. I don’t mind if you aren’t the most cheerful person in tennis. If that’s what it takes go and win!”

Former England rugby captain Mike Tindall (‏@miketindall13) is pleased with his bet: “Well I can sit back and enjoy the Wimbledon final, had a flutter on Murray and Roger. #winnerwinnerchickendinner”

Ex-England cricket captain Michael Vaughan (‏@VaughanCricket) reckons the British No1 will do it: “I told you all earlier in the competition that Murray would win this year…..”

While QPR’s Joseph Barton ‏(@Joey7Barton) likes Murray because he’s not liked. Right. “I know a lot of people don’t like Murray. But I actually like him, mainly down to the fact nobody really likes him…”

The son of former Liverpool manager Kenny Dalglish, Paul Dalglish ‏(@pauldalglish) reckons Murray’s taken a leaf out of his father’s book: “I think Andy Murray has been to the same media training center as one @kennethdalglish. I think you have to be Scottish to appreciate them but Murray’s interviews are brilliant, makes me proud to be Scottish.”

Finally, Piers Morgan ‏(@piersmorgan) states his case on why English people should embrace Murray: “So what if #AndyMurray doesn’t want England to win at football? No English fans ever want Scotland to win. But we’re all BRITISH. Grow up.”