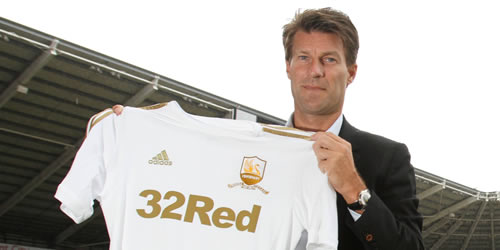 Jonathan de Guzmán admits the chance to play for Michael Laudrup’s Swansea City made it an easy decision to join the Premier League outfit on a season-long loan from Villarreal.

The 24-year-old, who scored twice in 18 appearances for Villarreal last season, worked under the Swans manager during the former Denmark international’s spell in charge at Mallorca in 2010.

De Guzmán, who has four caps for the Netherland’s Under-21 side, scored five goals for during Laudrup’s reign at Los Bermellones and is the Swansea boss’ second signing following the arrival of Jose Manuel Flores.

“Once the opportunity came along to join Swansea and Michael Laudrup it was a done deal. I didn’t have to think twice about it,” he told the club’s website.

“I watched Premier League football every week on the TV last season. I was aware that Swansea are a good footballing side, but they really caught my eye when they beat Manchester City.

“They had a great season and I’m really looking forward to the challenge of playing on a new podium in the Premier League.

“I’m grateful for the opportunity and grateful that the manager has acknowledged me as a player.”

“I didn’t get much game time when the new coach came in [at Villarreal] and it was a frustrating time for me. I just want to play football on a regular basis again.

“I’m fortunate that I will be working under a good coach [Laudrup] at Swansea who lets you be free and allows you to do what you do best.

“I like to attack as a midfielder, box-to-box, and hopefully I can add my share of goals along the way.”