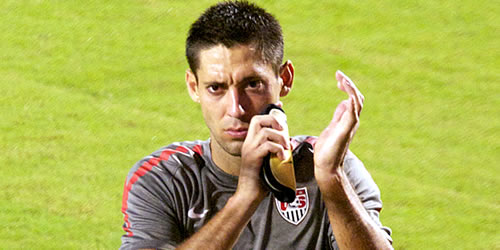 Liverpool’s owners, Fenway Sports Group, were left red-faced on Wednesday when they were forced to remove a report on their website which claimed the Merseysiders had already secured the signing of the USA international.

Fulham were quick to deny the reports of a deal having already been struck but new Kop boss Rodgers has now revealed that the Reds have made inquiries over the possibility of signing the American striker.

“Clint is a player we’ve enquired about, it is as simple as that,” said Rodgers.

“Ian Ayre, our managing director, has spoken with the club to see what the position is. That is where we’re at.

“He’s a very talented player but we don’t like to talk about other clubs’ players.”

Rodgers also spoke about the speculation surrounding Andy Carroll’s Anfield future, with reports suggesting the striker is set to be loaned out next season after failing to impress since his £35m signing in January 2011.

“There has been a lot written and spoken about him but first and foremost Andy is a Liverpool player,” added Rodgers.

“To consider a loan period for someone the club spent £35million on isn’t something we’re looking to do at this moment in time.

“Andy will be the same as every other player – if there’s ever an offer that comes in we’d look at it as a club and see if it’s going to be worthwhile for the club and the team as a whole.

“The club invested £35m in him. People talk about whether he can fit into my style or not, but if you’re a club and you spend £35m on a player you’d like to think he can fit into whatever style the team plays.

“He’s a good player. He’ll join the rest of the group next week and we’ll take it from there.”