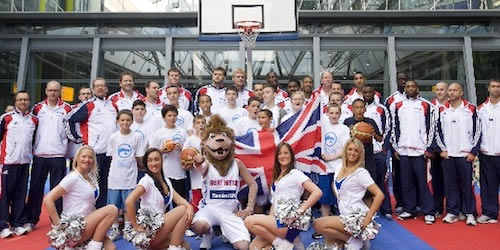 British basketball coach Chris Finch insists Ben Gordon was given every opportunity to join up with the team and claims to have no worries about heading into the Olympics without him.

NBA star Gordon, who was born in London but moved to the States just months later, committed himself to the British team in 2008 but has yet to make his debut, due to a number of injury, family and other commitments.

This week he moved from Detroit Pistons to Charlotte Bobcats, which meant he was not involved in Finch’s week long training camp in Houston, where Great Britain – who make their first Olympic appearance since 1948 this summer – lost five games against Nigeria, Russia and Lithuania.

And when the team flew into Heathrow this morning, the 29-year-old was not on the plane.

“We are moving on without Ben,” Finch told national press agency Sportsbeat.

“We’ve had a lot of dialogue with him but, unfortunately, he was not in a position to commit and we have to focus on building our team. We could not afford to wait anymore.

“It’s disappointing because we thought this was the year he would definitely play.

“He had a lot of chances to reach out and I think we wanted to but there were lots of changes going on in his life, he’s just got traded and has a big season coming up.

“We need to focus on the guys that are here now. Integrating players is always difficult and integrating extremely talented players can been even trickier.

“That is why we needed Ben in early to give ourselves the best chance of the best preparation period.”

Gordon’s absence is the second blow for Finch, after fellow NBA player Byron Mullens, who also plays for Charlotte, withdrew due an injured toe.

“When you miss two NBA players from a line-up it is going to hurt,” added Finch, whose side now head to the Team GB preparation camp in Loughborough ahead of another tune-up match with France next weekend.

“We still have our most talented line-up ever assembled, with Luol Deng, Pops Mensah-Bonsu, Joel Freeland and Rob Archibald all fit at the same time for the first time.

“We’re excited to be back now and looking forward to getting into the Olympic spirit.

“We played some pretty tough teams last week and our main priority was to see which of our younger players could help us and in what capacity.

“The next thing is we need to find our team rhythm. We played well but we’ve had a hard time closing games and we need these games to get our guys up to speed.

“Luol has been training with us but we want to ease his conditioning and fitness into our program.

“He’s come out of a tough NBA programme, he played the second most minutes in the league this year. We need to get him slotted in – and he should play against France – and then it’s all systems go.”

London 2012: Victoria Pendleton’s dreams made possible by her mother