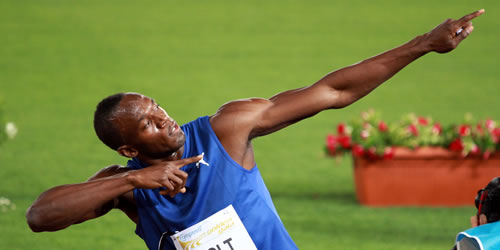 Usain Bolt is favourite to win gold in the 100 metres at London Games Photo: S Zwerink, via Wikimedia

The men’s 100m receives the most attention at every Olympics, but unlike the Beijing Games, London’s blue-ribboned event will be far from the formality Jamaica’s Usain Bolt experienced in 2008. Due to the recent emergence of Yohan Blake, the impressive return of American Justin Gatlin from a drugs ban and Tyson Gay’s consistently sub-10 second form, Bolt will have to be at his best to retain his Olympic title. However, it is Bolt’s training partner Blake who will pose the biggest threat to his fellow Jamaican. Blake is a more traditional sprinter: shorter, muscle-bound and possessing extreme explosive power. And it is that power which recently led to a shock double victory over Bolt in the 100m and 200m sprints at the Jamaican Olympic trials. While we would all love to see fan-favourite Bolt do his victory dance after clinching another 100m gold medal, it is a simple fact that the emergence of other talent right before the London Olympics will make these Games unique for Bolt. For the first time, he will be running under pressure and remains to be seen whether the usually unflappable Jamaican cracks or thrives in the spotlight.

At this point the one big factor we must take into consideration is the weather. Despite the fact that World Records are usually broken at Olympic Games – due to the athletes’ peak in form and a brand new track to run on – if it rains you can be sure that Bolt’s 9.59 seconds will not be broken in Old Blighty.

A Brit winning the 100m on his home turf would be a fairytale story. London’s hopes of a local hero are in the hands of the recently reinstated Dwain Chambers and rookie Adam Gemili. Chambers has returned from a two-year drugs ban and, while consistent, does not appear to be recording any times that will trouble the Jamaicans or Americans too much. Gemili on the other hand is the unknown quantity. The 18-year-old only took up sprinting full-time this year after initially hoping to become a footballer. The switch is paying dividends – his times improving at an alarming rate. Despite a personal best time of 10.05 (incidentally a European Junior record), he has shown form to prompt title hopeful American Tyson Gay to label Gemili “potentially the greatest of all time”. While these Games may have come a couple of years too soon for the Brit, he continues to progress at this rate we may have someone to cheer on in the final.