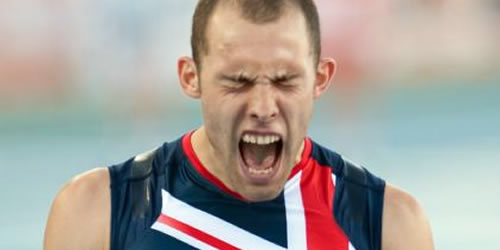 Dai Greene will captain Great Britain’s track and field athletes at the London 2012 Olympics – and there certainly won’t be any doubt about whether he knows the words to the national anthem.

UK Athletics head coach Charles van Commenee caused controversy when he appointed American-born Tiffany Porter to the same role ahead of the World Indoor Championships earlier this year, the sprint hurdler later refusing to recite the lyrics to God Save The Queen.

However, world 400m hurdles champion Greene is a safer and less controversial choice, and he’ll take captaincy duties for the 78-strong team, the largest Team GB athletics delegation at the Games in 20 years.

“It is an incredible privilege to be asked to captain the British athletics team at any time, but to be given the honour at a home Olympic Games is just incredible,” he said.

“We have a great team spirit in the camp, which will make giving my speech much easier.

“I think our team is one of the strongest in history and I believe that we can go out and do Britain proud and I intend to lead by example.”

Greene was also captain at last year’s European Team Championship and van Commenee hailed him as the stand-out choice.

“He is a very professional athlete who is both liked and respected by the rest of the team,” he said.

“He knows what it takes to win at the highest level and that is a valuable experience to share with the team. I know we can also rely on Dai to inspire his teammates and I wouldn’t be surprised if he raised a few laughs during his speech along the way.”