After nearly 8,000 miles and nine weeks, the London 2012 flame makes a dramatic arrival in the Olympic city 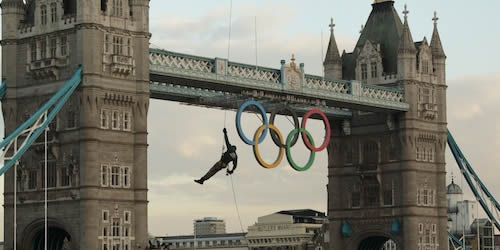 After nearly 8,000 miles and nine weeks, the London 2012 flame has made a dramatic arrival in the Olympic city.

With military timing, a Royal Navy helicopter appeared above Tower Bridge at exactly 20.12pm and a commando abseiled down to meet two-time Olympic champion Dame Kelly Holmes, who ran through the ramparts of the Tower of London.

The flame was then taken to the Queen’s House by the Tower’s famous Yeoman Guard ahead of the start of its seven-day journey around the capital on Saturday.

“With the eyes of the world on London we welcome the Olympic flame to the capital this evening in spectacular style,” said London 2012 chairman Seb Coe.

“The week ahead will see hundreds of inspiring people enjoying their moment to shine as they carry the flame through the streets of every London borough as the final countdown to the London 2012 Games begins.”

Organisers Locog estimate more than ten million people have so far lined the route of the flame’s journey and massive crowds are expected in the next seven days, with the weather forecast finally ready to turn for the better.

So far, the torch’s progress has been unmarked by real incident but earlier a 17-year old tried to grab a torchbearer as she carried the flame through Maidstone in Kent.

The teenager, who was later arrested, shouted ‘Allahu Akbar’ – Arabic for ‘God is Great’ – as he lunged for bearer Anna Skora. She stayed on her feet as the police protection team wrestled the man to the ground and successfully completed a handover to charity worker Graham White a few moments later.

But Metropolitan Police official admit the next week will be one of their biggest security challenge.

“You don’t have a right to disrupt the torch and the security team are there to prevent you from doing so, so don’t go inside the protective bubble,” said Metropolitan police assistant commissioner Chris Allison.

“Apart from the odd isolated incident we have had a fantastic torch relay with millions watching it and we are determined to maintain that record in the final week of its journey.”