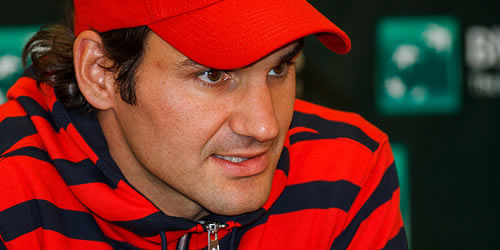 Roger Federer is yet to win a singles gold medal Photo: Mirsasha, via Flickr

At 30 years of age, Roger Federer has it all. Almost.

He’s won all the Grand Slams—17 of them. He’s master of the World Tour Finals—six of those. He’s reached more Masters finals than anyone else and won 20 of them. He currently holds eight titles, most recently his favourite one at Wimbledon. Now he has headed the rankings longer than any other man.

Yes, he has it all—except one. Having tasted gold in doubles at the 2008 Olympics, Federer will now attempt to complete the set with Olympic singles gold.

And his ambition has looked more realistic with each passing week. Since starting the year ranked No3 and 5,500 adrift of the top man, Novak Djokovic, he has won 46 out of 52 matches and 10 out of 11 on grass. He has also won the last match he played against every seed in the Wimbledon draw.

As if that was not enough, he has now become the chief beneficiary of Rafael Nadal’s absence, for the other pair in the dominant quartet, Djokovic and Andy Murray, have been drawn in the same half. It all gives a touched-with-gold air to the man who leapfrogged over Nadal and Djokovic to become the top Olympic seed.

With the grass under his feet and the wind in his sails, can anyone deny Federer a golden 31st birthday present?

No1 seed singles; No6 seed doubles (with Stan Wawrinka)
Olympics record: fourth in Sydney, lost to Tomas Berdych in the second round in Athens, lost to James Blake in the quarters in Beijing, but won gold with Wawrinka in doubles.

Federer may have avoided the heavyweights among the seeds: Not only is Murray in the bottom half but so are Berdych and Jo-Wilfried Tsonga, who beat him in the Wimbledon quarters in 2010 and 2011. But as luck would have it, the early rounds throw up intriguing challenges tinged with more than a little dejà vu.

In his opener, Federer faces Alejandro Falla who gave him an almighty scare in the first round of Wimbledon in 2010, winning the first two sets and taking him to a tie-breaker in the fourth.

Next up is the man who almost did the same in the third round this year, Julien Benneteau. The Frenchman also won the first two sets and took Federer to a fourth set tie-breaker. Should Benneteau fall at the first hurdle, his replacement would be Mikhail Youzhny, Federer’s quarterfinal opponent this year—and he played him at Wimbledon last year too. The Russian would give him less cause for palpitations: Youzhny has lost all 14 of their matches.

There is room for an upset by Denis Istomin, who has performed well on grass this summer, against Fernando Verdasco, taking him perhaps to a third-round meeting with Federer. But the quarterfinal opponent is hard to predict.

John Isner beat Federer on clay in the Davis Cup in the spring and has just won the Newport grass title last week. Janko Tipsarevic is the highest seed in the segment, but with a repeat SW19 opener against David Nalbandian and both Karlovic and Isner looming, he faces a tricky road that might end with Isner.

* Philipp Petzschner will take the place of Ivo Karlovic, who has not recovered from a foot injury.

No4 seed singles; unseeded doubles (with Feliciano Lopez)
Olympics record: lost in first round in Beijing to Tipsarevic, reached second round in doubles with Nicolas Almagro.

David Ferrer is the only other player apart from Federer to have five titles this year—most recently last week in Bastad. The 30-year-old is consistent, hard-working and arguably playing the best tennis of his life. Quarters at the Australian Open, semis in Paris and then quarters at Wimbledon, his least favourite surface, taking down Andy Roddick and Juan Martin del Potro before losing to Murray in four sets—three of them tie-breakers—attest to his quality.

He has increased his aggressive game and improved his serve, both qualities to benefit from grass, and his draw should see him very comfortably through to a quarterfinal against del Potro again—and he lost just eight games to the Argentine at Wimbledon. One hiccup may be Philipp Kohlschreiber in the second round: The German has shone on grass this season, giving Tsonga a real challenge in the quarters of Wimbledon.

Del Potro should have no problem until the third round, where he may meet the blossoming Grigor Dimitrov, who could take out Gilles Simon. But whichever of del Potro and Ferrer wins the quarters, they will not fancy their chances against Federer. The former has not beaten him since 2009 and the latter has lost all 13 matches.

No3 seed singles; unseeded doubles (with Jamie Murray)
Olympics record: The Briton lost to Yen-Hsun Lu in the first round in Beijing in 2008, reached the second round of doubles with Murray.

It is, judging from the Twittersphere—and a dollop of common sense—a tough draw for Murray.

But then, as he pointed out after beating Ferrer in the Wimbledon quarters: “Everyone kept telling me I had such a hard draw and how tough it was going to be to get through…I managed to do that.”

Then, he started with Nikolay Davydenko—on a poor run of form this year—but this time, Murray plays Swiss flag-bearer and doubles gold medallist Wawrinka, ranked 26 and a powerful player when on song. Murray, and many others, will remember vividly their five-set battle under the roof of Centre Court in 2009 and, still more clearly, the Swiss aggression in beating Murray at the 2010 US Open.

The next challenge for Murray is the No21-ranked Richard Gasquet squeezing into the seedings at 16 at the last minute. He can certainly turn on the style—especially over the sprint format of best-of-three. He beat Murray in Rome this year but lost to him after winning the first set at Roland Garros. They do have some Wimbledon history, too: Murray won after losing the first two sets to Gasquet back in 2008 but took only three sets to win last year.

The big guns are lined up from the quarterfinal stage, the first being the big frame and power of Berdych, who holds a 4-2 head-to-head advantage—including their only meeting this year in Monte Carlo. Beyond that, in the semis, lies Djokovic or Tsonga.

Murray has won all three of his encounters with the Frenchman on grass, but in 13 meetings, he has never met Djokovic on grass. In the last 12 months, though, they have split their four hard-court matches and, judging from Murray’s performance at Wimbledon this year, maybe he can score a famous win over his friend.

No2 seed singles; No8 seed doubles (with Viktor Troicki)
Olympics record: won bronze medal in 2008 in Beijing over Blake, lost in first round of doubles with Nenad Zimonjic

The 65-ranked Fabio Fognini must wonder what he’s done wrong. At Wimbledon, he was whitewashed by Federer in the second round: Here, he is likely to receive the same treatment in the first from Djokovic.

The Serb, who looked a little short of his best against Federer at Wimbledon, has had time to recharge his batteries, and will need them early if Roddick continues the form that won him the title in Atlanta last week. In fact, though they haven’t played in a long time, and never on grass, Roddick has a good record, winning four of their last five matches. And there may be no-one in SW19 who would like a title at Wimbledon more than Roddick.

Another terrier-fierce old campaigner is also in this segment. Lleyton Hewitt played his first Olympics in Sydney and this will surely be his last after so many injury-filled years. He took a set off Djokovic at this year’s Australian Open but he will have to beat Jurgen Melzer or an in-form Marin Cilic—winner at Queen’s and in Umag last week—to play the Serb again.

And in the quarters, the prospects for Tsonga are not good, despite his love of grass and his good run at the All England Club this summer. Djokovic beat him at Wimbledon in the semis last year—and three more times since. And his first match is against the hot-and-cold talent of Brazilian Tomaz Bellucci, who beat a class field to win in Gstaad last week and reached the semis of Stuttgart the week before.

Tsonga’s second round holds the still improving Milos Raonic, who is certainly capable of an upset across three sets.