London 2012 Olympic tennis preview: We bring you up to speed on everything you need to know ahead of the tournament at SW19 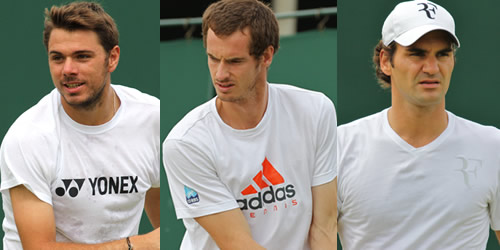 The place is familiar: It is, after all, fewer than three weeks since the All England Club crowned its 2012 Wimbledon champions.

Now the best in tennis are back to play on lawns as pristine as they were before the Championships began, only this time, it is Olympic gold that waits at the end of the rainbow.

And rainbow is an apt word for the transformed grounds of this most familiar of venues. Courts have been surrounded by eye-popping pink and purple while a vivid lime-green 2012 logo bursts out from the ivy-clad façade of Centre Court.

To be honest, it’s all a bit of a shock, and it will be exacerbated when the multicoloured strips of the 44 nations taking part are revealed this weekend: White is, on this occasion, not the order of the day.

And the differences do not stop with colour—and music. Here, as a precursor to the tournament previews, is an essential guide to London 2012 tennis.

The draws: the singles draws comprise 64 competitors each, half the size of Wimbledon and the other Grand Slams. There are a commensurate 16 seeds per draw rather than 32. In doubles, there are 32 pairs in the men’s and women’s draws. However, because of a late injury withdrawal by the Bondarenko sisters, the women’s draw is down to 31, with a first-round bye handed to top seeds, Liezel Huber and Lisa Raymond.

The courts: only 12 of the 19 courts will be used in competition, the other seven being used solely for practice.

Mixed doubles: This returns to the Olympics as a medal sport for the first time since Paris 1924. The draw will comprise 16 pairs, with four teams seeded. The draw will be held midway through the tennis event on 31 July.

Andy Murray plays 26-ranked Stan Wawrinka in Round 1. The two have had several close matches: The Swiss beat Murray in a gruelling third-round match at 2010’s US Open and the Brit memorably beat Wawrinka in their only Wimbledon meeting in 2009—the first match completed under the roof—in almost four hours and five sets.

In a challenging draw, Murray could go on to meet Richard Gasquet, Berdych, Djokovic and finally a rematch of Wimbledon’s final against Federer.

The top-ranked British woman, Heather Watson, No71, meets Silvia Soler-Espinosa, No63. The Spanish woman is an improving player with some useful wins this season over Kanepi, Svetlana Kuznetsova, and Daniela Hantuchova but has little experience on grass.

No76 Anne Keothavong has the tougher task of former No1, current No8, Wozniacki. The two have met only once on hard courts three years ago: Keothavong won one game. But the Dane is without a title this year and fell in the first round at both Eastbourne and Wimbledon.

No100 Elena Baltacha should beat opening opponent, Agnes Szavay. The Hungarian is currently unranked, having not played a main-draw match since the 2011 French Open due to back injury.

• The 2012 doubles draws have a record number of siblings. Two sets come from the USA: Venus and Serena Williams, and Bob and Mike Bryan. The others are the Radwanskas—Agnieszka and Urszula—and GB’s Murrays, Andy and Jamie.

• The Williams sisters, twice gold medallists—2000 and 2008—and Wimbledon champions, are unseeded in the London 2012 doubles. They could meet the Brit duo Robson and Watson in the second round.

• No fewer than four tennis players will be their nation’s flag-bearers: For Serbia, Djokovic; for Russia, Sharapova; for Switzerland, Wawrinka; for Poland, Agnieszka Radwanska. Nadal was to be Spain’s until he withdrew with injury.

• The youngest ever gold medallist in singles, men or women, was Jennifer Capriati in Barcelona 1992, aged 16. The oldest dates back to London 1908, Britain’s Arthur Gore. Aged 40, he won doubles gold, too, and went on to win a third singles title at Wimbledon the next year.

• The only players to defend an Olympic title have been Gigi Fernandez and Mary Joe Fernandez, doubles gold in 1992 and 1996.

• Conchita Martinez is the only player to win medals at three different Olympics, all in doubles: silver 1992 and 2004; bronze 1996.