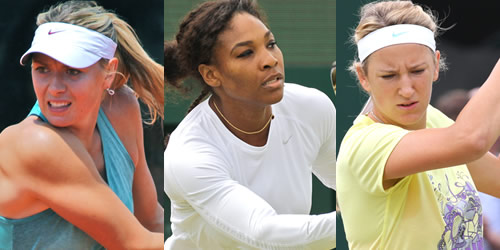 It seems as though the tennis storyline for London 2012 was preordained.

Perhaps it is only right that two of the greatest players of their generation, Roger Federer and Serena Williams, should claim the Wimbledon titles just weeks before they return to their favourite surface to play for the one piece of gold missing from their collection.

Both reclaimed the Wimbledon crown at 30. Both have won it multiple times—along with the US Open and Australian Open. And both have completed the Grand Slam with one French title apiece.

They have also tasted gold in the Olympic doubles, but neither, so far, has won singles gold.

Like Federer, Williams has reasserted her dominance at just the right time. She is one of only three women this year to win four titles—Charleston, Madrid, Wimbledon and, last week, Stanford—to give her a streak of 28 wins from her last 29 matches. In the process, she equalled her sister Venus for the most titles among active players: 43.

She joked, after equalling her sister’s tally of five Wimbledon singles trophies, that she always had to do everything that Venus did—and Venus won singles gold 12 years ago in Sydney.

There is no doubt that the younger Williams is hungry to win, physically in top condition, and using the grass to its full potential. She hit the fastest serve (with Sabine Lisicki) of 120mph and topped the leader-board with 102 aces, 24 of them in her straight-sets defeat of Victoria Azarenka.

On top of that, she has huge self-belief. As she said at Wimbledon: “Well, I’m Serena Williams; I’m very confident.”

Can Azarenka gain revenge in the scheduled repeat of their semi at the All England Club? Or will Maria Sharapova continue her 2012 surge to claim gold in her Olympics debut? Or can last year’s Wimbledon champion, Petra Kvitova, or two-time quarter-finalist and 2011 semi-finalist Lisicki, use their grass talent to foil Williams’ destiny?

No1 seed singles.
Olympics record: lost in third round in Beijing to Venus Williams; lost in second round of doubles.

The No1 from Belarus will surely be Williams’ biggest impediment to reaching the final. Not only did she put together a stunning run of four titles at the start of the year, she has reached the semis at Wimbledon for the last two years.

However, if she reaches that semi-final showdown, she has to find a solution to a problem she has worked out only once in nine meetings—and that was back in Miami more than three years ago. Williams has won all six matches since, and both their Wimbledon contests.

Azarenka has a couple of challengers to test her before Williams, though. The third round holds another strong 30-year-old, Nadia Petrova, winner on grass in ‘s-Hertogenbosch. The other segment of her quarter is also strong, holding two of the fastest improvers on the tour in recent months. Angelique Kerber has risen week on week to current world No7, reached the semis both at the US Open and at Wimbledon, and has titles this year from Paris and Copenhagen.

Kerber’s third-round match poses either Sara Errani, another new name in the top 10 who has just won her fourth title of the year in Palermo, or former Wimbledon and Olympic champion, Venus Williams. The 32-year-old is still battling with a debilitating virus but had a taste of victory in the Wimbledon doubles. By chance, she also beat Azarenka in the Beijing Olympics.

No4 seed singles; unseeded doubles (with sister Venus)
Olympics record: lost in singles quarters in Beijing to Elena Dementieva; won gold in doubles with sister in Beijing and Sydney.

Jelena Jankovic, having faced Kim Clijsters in the first round of Wimbledon, now finds Williams in her Olympics opener. The Serb beat the American the last time they played, but that was on Rome’s clay more than two years ago. And apart from a final run at Birmingham in June, she has lost in the first round of seven of her last nine tournaments, and only won one match in each of the other two.

Williams’ first seed in the third round should also be good news. Vera Zvonareva may be a 2008 bronze medallist and former Wimbledon finalist, but she has wrestled with form and fitness all year, retiring in the third-round of Wimbledon. But before that, Williams could be tested in Round 2 by an unseeded Francesca Schiavone or the rising talent of Mona Barthel.

The intrigue continues into the quarters where, if Caroline Wozniacki can rediscover her old No1 form, Williams faces one of the few women to beat her this year, in Miami. The other seed, Na Li, may ease Wozniacki’s progress if she succumbs to Tamira Paszek in the second round. The rising young Austrian reached the quarters at Wimbledon, where she tested Azarenka, and won in Eastbourne.

Sharapova knows how to win on grass: She started doing it with her first Wimbledon title eight years ago, followed by two semis and, last year, she reached the final. She was hotly tipped to win again this year after winning three titles from four tournaments—including her first French Open—but fell in the fourth round. That will probably make her all the more determined to succeed at her very first Olympics.

Her early rounds, like Wimbledon, are not overly challenging but then luck has thrown Lisicki, the woman who beat her there, into her path in the third round.

Sharapova’s quarter-final throws three other Grand Slam champions into the pot. She should not lose sleep over Ana Ivanovic—she beat her in both meetings this year—nor Sam Stosur—who she has beaten 10 times out of 11—but buried unseeded is Clijsters who is also an Olympic debutant and playing her last ever tournament at Wimbledon.

It’s a place where Clijsters has never won and, though her chances look slim here, it would be a story for the history books should she succeed.

No4 seed singles; unseeded doubles (with sister Urszula)
Olympics record: lost in second round in Beijing to Schiavone; lost in first round of doubles.

Radwanska continues to confound fans and fellow players alike. Her tactical guile, her mix of slice and angle, her accuracy and her willingness to finish things off at the net have seen her gradual rise to No2. With three titles and a 44-10 win-loss record this year, she has beaten most of the top players except Azarenka and, most recently in the Wimbledon final, Williams. It’s worth saying, though, that Radwanska is the only top-5 player in the last 12 months to take a set off Williams.

The Pole will be tested early by the strong Julia Goerges, though she has beaten her in both meetings this year. And Goerges has returned to clay since Wimbledon, which will do her campaign little good.

Radwanska’s first big test comes in Round 3 against Maria Kirilenko: They went to three long sets in the Wimbledon quarters. Then against her potential quarter-final opponent, 2011 Wimbledon champion Kvitova, she has a losing record of 3-0, though their only three-setter was on grass.

The outcome will more than likely lie in the Czech’s hands: If she is playing her best, she could advance all the way to the final—and judging from her Fed Cup performances, she becomes most fired up when playing for her country. Should she lose focus, though, she may not make it past last week’s Carlsbad winner, No13 Dominika Cibulkova.