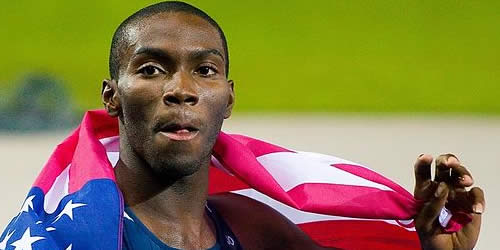 Kerron Clement is a two-time world champion Photo: A Zehetbauer, via Wikimedia

Two-time world champion Kerron Clement claimed he spent four hours on a bus after the driver got lost on the way to the London 2012 Olympic village.

Games organisers are expecting a busy day with hundreds of athletes checking in but it’s not all been running smoothly according to Clement – who takes on Dai Greene, Great Britain’s current world champion, in the 400m hurdles next month.

“Um, so we’ve been lost on the road for 4hrs. Not a good first impression London,” he Tweeted.

“Athletes are sleepy, hungry and need to pee. Could we get to the Olympic Village please?”

The American track and field squad will spend the next three weeks at their training base in Birmingham but needed to travel to the Olympic park to pick-up their all-important accreditation.

The US Olympic committee has invested heavily in winning over British fans ahead of the Games, with a PR drive entitled ‘Thank You Britain’, which has featured leading athletes learning Cockney rhyming slang.