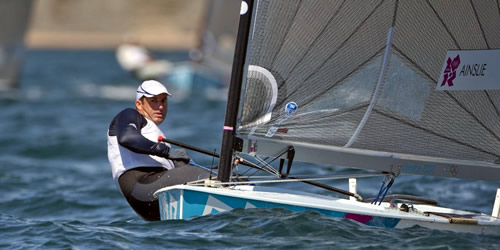 Ben Ainslie continued his charge for his fourth consecutive gold medal in the Finn class on Monday as he ended day two in third place with six races left at Weymouth and Portland.

“I wasn’t happy with my own performance,” said Ainslie. “It will get me fired up for the rest of the week, it’s a very fine line between success at this level.

“I don’t think I went the right way all day, hopefully it will go a lot better.”

Elsewhere, despite a poor race in the men’s 49er, both Stevie Morrison and Ben Rhodes remain confident of success.

“It’s frustrating, but it’s happened, we’ve got to deal with it and carry on,” said Morrison.

“It’s a long event and it’s about average scores. We’ve always got the potential to go out and win two races in a day so there is no need to panic or change the game plan yet.”

Meanwhile, Ian Percy and Andrew Simpson are in pole position in their defence of their Star Class Gold, following a second-place finish following on from their third in the opener on Monday. The pair are level on 18 points with Norway, while their arch-rivals in Robert Sheidt and Bruno Prada are fourth just two points behind.

Paul Goodison had a disappointing opening day in his defence of his Laser title, currently running down in 17th after finishing 10th and 23rd in the two races on Monday as his rival Tom Slingsby finished the day top of the standings.