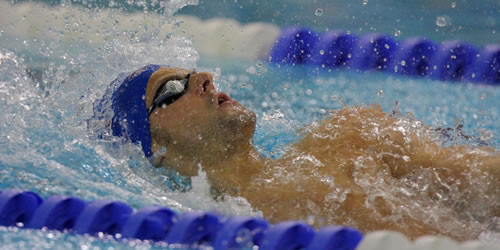 Great Britain swimmer Liam Tancock was upbeat despite missing out on a London 2012 Olympics bronze medal in the 100m backstroke.

The 27-year-old Exeter Swimmer set off well to try and give himself the best chances of a medal, but tired in the back 50m, finishing fifth in a time of 53.35 seconds – four-tenths of a second behind a medal.

Tancock, who finished a place higher than four years ago in Beijing, believed that he gave it his best, and is already concentrating on Rio 2016.

“I went out and gave everything,” said Tancock, who has won a medal at every major international tournament except the Olympics.

“It didn’t come off but Rio is only four years off. I love what I do – swimming is a great sport, it gives you so many friends and keeps you fit.

“This crowd is amazing and it’s a dream to swim in front of so many supporters. I came here today and gave it my best.

“I was walking through the call room and it said ‘inspire a generation’. I hope that’s what Team GB are doing and I hope we inspire a future generation of swimmers and Olympians.

“It was fantastic and the home support is brilliant. I can’t ask for more, and it makes us swim faster, and I can’t wait for more performance later in the week.”

Matthew Grevers from the USA took gold with a time 52.16 secs and set an Olympic record in the process.

Robbie Renwick also looked forward to the next Games in Brazil as he finished in sixth place in a time of 1:46.53 minutes after struggling to cope with the speed in the men’s 200m freestyle.

The Glasgow-based swimmer was happy with his efforts and believes that the event is becoming a showpiece final.

“If I can keep going the way I’m going, maybe I can win a medal in four years,” said the 24-year-old who won two golds at the British Championships in March.

“But it was a solid performance and faster than yesterday. It went by so fast for me and it was a good swim.

“It’s my favourite event and I find it the most exciting. I would have loved to have watched that final, but it’s more important to be part of it and I finished in the top six, so I can’t complain.”

France were rewarded with their third gold in two nights, and a second gold for winner Yannick Agnel who won the 200m freestyle in 1:43.14 mins, to add to the men’s 4x100m relay gold.

Gemma Spofforth, Great Britain’s last finalist of the night, came fifth as she put in a solid effort in the women’s 100m backstroke.

Spofforth came in fifth place, one place lower than her 2008 finish in Beijing, as she recorded a time of 59:20 secs.

The 24-year-old, who has overcome personal problems to enjoy her swimming again, insisted she left everything in the pool.

“I gave that everything,” said the Florida-based swimmer. “It’s the journey and not the destination.

“At time of crisis, there’s always light at the end of the tunnel – I’m really enjoying it. I’ve started enjoying life again – I have a passion and want to do everything. This is just a speed bump in the road.

“I came away a little disappointed but I have said all along that for me it’s about finding something I am really passionate about.

“One year ago I was ready to quit swimming so to get fifth is really special to me.”

“I am planning to climb Everest. I started climbing this year, started loving it. It will probably take at least five years.

“Working with the kids at home, I can say to them that I’ve been in an Olympic final.”