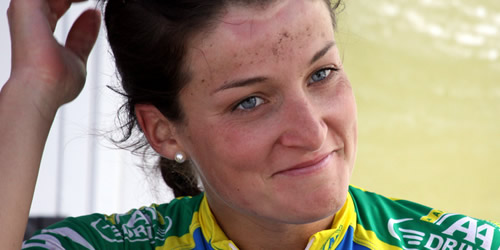 Lizzie Armitstead finished second behind Marianne Vos Photo: B A Ryan, via Flickr

Lizzie Armitstead delivered Great Britain’s first medal of the London 2012 Olympics as she claimed cycling road race silver after a sprint finish on The Mall.

It came down to a straight fight between the two and Russia’s Olga Zabelinskaya, as they shot down The Mall, with a thunderstorm and standing water adding to the danger and Vos edging out Armistead.

Defending champion Cooke struggled to impact on the race after she dropped out of the back of the peleton with two-thirds of the race completed.

With less than five kilometres to go, Armitstead positioned herself on Vos’ wheel, as expectation increased when she entered the final kilometre.

But the Russian, who knew gold was beyond her and was doing all she could to secure a medal, attacked hard, with Armitstead lying in wait for a charge to the line.

In a thrilling sprint finish, Vos pipped Armistead on the line, leaving her to claim silver, which she declared herself delighted with.

She said: “I’m a bit shocked. I was so glad I committed to that break, but I should have jumped early, but never mind.

“We discussed before what happened in the men’s race that once a group is committed in front, it’s hard to be in the back.

“It’s the most special thing I’ve experienced in my life. It’s crazy and so inspiring.”