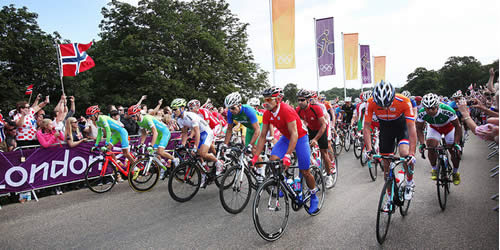 Mark Cavendish’s dreams of Olympic gold were dashed as controversial Kazakhstani Alexander Vinokourov powered to victory on The Mall.

Vinokourov, a silver medallist in Sydney, who served a two-year doping ban between 2007 and 2009, powered clear of Colombia’s Rigoberto Uran, who took silver, in a fractured finish that defied those who expected there to be bunch sprint.

Alexander Kristoff, of Norway, claimed the bronze medal as the Manx Missile crossed the line in 29th.

Cavendish had staked his entire season on this one race, shedding weight to be competitive and giving up on defending his prized Tour de France green jersey.

But the five-strong British team, who had worked so hard to keep the race disciplined, paid the price for their lack of numbers and support from other teams in the closing kilometres.

British team officials were on the line hoping to cheer home their man, knowing that the proven formula for host nations at the Games is that success breeds success and the hardest gold to win is the first.

But a shocked silence seemed to sweep across fans waiting on The Mall as they realised their star man would not given treating them to a trademark sprint for the line.

Cavendish, usually so cocky and confident, looked wracked with nerves before the riders rolled out of central London, his anxiety probably not assisted by a pep talk from the Prince of Wales on the start line.

But he seemed to relax as his team, led by David Millar and including Tour winner and runner-up Wiggins and Chris Froome and loyal lieutenant Ian Stannard, immediately committed themselves selflessly to the cause.

For over 200km they maintained discipline and neutralised all threats but, in the closing stages, they simply ran out of fuel.

Stannard put in a massive shift in a bid to get the peloton working together to drive down the time gained by the leading pack but no team wanted to share responsibility, leaving the host nation isolated.

Vinokourov and Uran Uran broke clear of the pack in the closing kilometres and the wily Kazakhstani outwitted his rival as they sprinted up The Mall.

London 2012 Olympics: Stay up to date with SofaScore live score