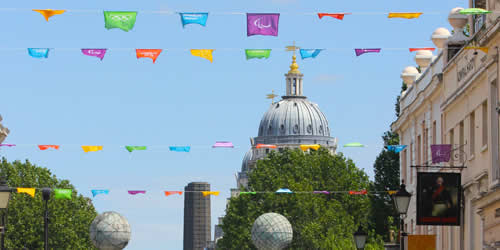 London has been transformed to welcome the world to the capital Photo: Marianne Bevis

The buzz is now so loud, the anticipation so nerve-jangling, the numbers—an estimated 20 million spectator journeys in London—so baffling that the brain threatens meltdown.

There will always be moments that have nations around the world glued to their screens: Who is not gripped by the prospect of Usain Bolt racing for gold against former training mate, now fierce rival and fastest man this year, Yohan Blake?

Some may draw smaller audiences but will capture new fans: Who is not intrigued at how men and women persuade their mounts to perform exquisite horse ballets in dressage? 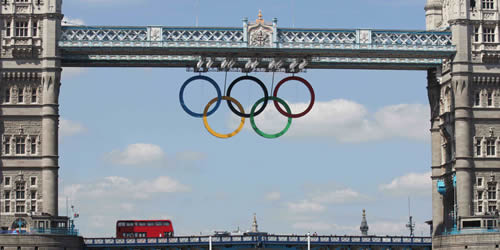 Other events simply revel in the joie to vivre of locals lining pavements: There are sure to be carnival atmospheres along the free-for-all routes of the marathon, the road cycling and the event that brings empathetic tears of pain to the eyes, the triathlon.

But amid these high days and holidays, choices will be made at random or by simple favouritism. Here, driven entirely by the latter, is one woman’s top 12.

Sprint cyclist extraordinaire—but she breaks the mould in so many ways. A slender, petite figure in a discipline big on muscle, and holding her own in a GB track-cycling scene bursting at the seams with medal-garnering men, she prizes her independence and her femininity, she is feisty but full of self-doubt.

Pendleton has six golds in World Championship sprinting dating back to 2005, with more in keirin and team sprints, and is defending gold medal winner from Beijing. But this will be her last Olympics: She retires to marry when London is done. And if all that is not enough to demand attention, her renowned rivalry with Australian Anna Meares, which has left blood on the track—literally—in the past, is worth the price of entry on its own. This will be one emotional race.

There will be more tennis flag-carriers in London’s opening ceremony than you can shake a stick at. Russia will be led by Maria Sharapova, Serbia by Novak Djokovic and Spain was due to be headed by Rafael Nadal until an untimely withdrawal with injury. Finally, for Switzerland, there is Roger Federer—except there is not.

The Wimbledon champion and world No1 carried the flag in both Athens and Beijing, and was invited to do so in his fourth Olympics. But he declined so that another countryman could take the honour. And who should it go to but fellow tennis player Stan Wawrinka, the low-profile, living-in-the-shadow, Swiss No2 who memorably won the gold doubles title with Federer in Beijing. A heart-warmer of a decision if ever there was one.

At 39 years old, Aldama will be competing in her fifth Olympics. Her first, competing for Cuba, ended in injury but she finished fourth in Sydney. Failing to get British citizenship in time for Athens, she finished fifth for Sudan. She was knocked out during qualies in Beijing, but last year she came fifth in the World Championships and, in Istanbul this year, she became the second oldest indoor champion.

Aldama also has two sons, but retirement? She won’t even consider it yet: “I want to be there in London, in the final, on the podium. I want to win the ultimate sporting prize.”

It’s sport on the water, so GB is truly spoiled for choice. There may be no Steve Redgrave—who won gold in five straight Olympics from Los Angeles to Sydney—but there are still medals in the offing.

The defending champions in the men’s four will be pitched against arch rivals from Australia, a boat that has shared victories in World Cup events this year.

There are high hopes, too, for brothers Peter and Richard Chambers in the lightweight four. This correspondent will be watching if only because she’s known another of the quartet since he was a twinkle in his parents’ eye. C’mon, Rob!

The sentimental story, though, must be Greg Searle, gold medallist in coxed pairs with his brother in Barcelona in 1992, he returned from 10 years’ retirement in 2010 and, at the age of 40, has a place in the men’s eight. His boat won silver in world championships so another gold 20 years after the first is just possible.

This will be Stevenson’s fourth Olympics and she was bronze medal winner in Beijing. But a lot has happened to the tall 29-year-old since then.

Last year, she lost both her parents to cancer and believes that, with a wholly different perspective on life, she is in a better position to win. She told The Guardian: “I can see the bigger picture now, an advantage that a lot of other athletes won’t have.” And there is, of course, a unique incentive:
“I really want to win gold. I really want to make my mum and dad proud.”

The elder by two years, Ali Browntree is the top triathlete in the world, but his brother is breathing down his neck. This year, the younger Jonny has won two races, came joint first with his brother in Blenheim and was second to him in Kitzbuhel.

Ali may be favourite for gold, but they are likely to swim, cycle and run shoulder to shoulder for much of this gruelling event—and there’s a good chance both will finish with a medal round their necks.

Check back tomorrow for part two.