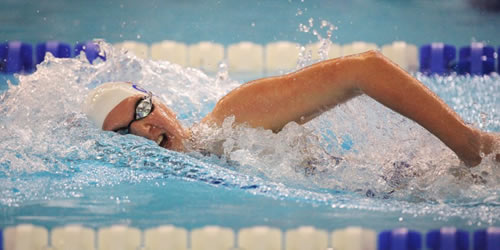 In doing so, the 23-year-old became the first British swimmer to ever win medals at two successive Games after her two golds in Beijing in 2008.

Mansfield-born Adlington thrilled a vociferous home crowd in the Aquatics Centre with a well-executed race plan which saw her cement third place with a strong final 100 metres.

Pre-race gold medal favourite Camille Muffat of France lived up to the hype and did not disappoint, setting a new Olympic record of 4:01.45 as she claimed her first Games title ahead of American Allison Schmitt.

“After only qualifying in eighth this morning I didn’t know what to expect, and tonight there was no pressure on me at all,” said Adlington afterwards.

“I know everyone else wanted to say, ‘Oh you got the gold in Beijing,’ but to me I was not expecting that at all, so I am so, so pleased with that tonight.”

Clearly overwhelmed by the support she received from the crowd, Adlington fought back tears when describing the pride she felt of her achievement.

“I’m crying because the crowd is so overwhelming,” she continued. “Twelve years of hard work has gone into that and it’s hard, it was so hard.

Meanwhile, Liam Tancock finished second in the 100m Backstroke semi-final behind Frenchman Camille Lacourt, and with the third fastest qualifying time he will be confident ahead of tomorrow’s final.

Gemma Spofforth also progressed through the semi-finals after finishing third in the women’s event, behind winner Missy Franklin of the USA, with fellow Brit Georgia Davies finishing in eighth place.

England v South Africa: Where now for the chastened hosts?