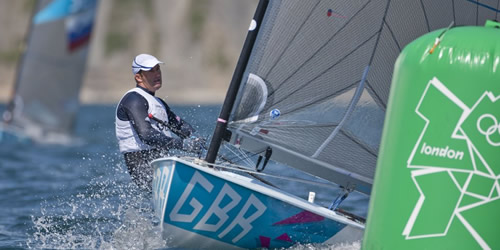 Ben Ainslie made a strong start to his bid to win a fourth consecutive Olympic gold medal on the opening day of the regatta at Weymouth and Portland on Sunday.

Ainslie, 35, recorded two second places in both of his Finn class races, finishing behind Denmark’s Jonas Hogh-Christensen on both occasions.

A gold medal at London 2012 will see Ainslie tie with Danish sailor Paul Elvstrom’s Olympic record of four golds, a record which has stood since the 1960 Olympics in Rome.

“Compared with my last Olympics it’s nice to get two solid starts,” said Ainslie after his second race.

“It wasn’t the greatest of races in the beginning, but that spurred me on. I have been better, but it is where you finish which is the important thing.”

Ainslie also praised the support of the home crowd at the event, adding: “I could hear it clearly and it really spurred me on.”

In the Star class, defending Olympic champions Iain Percy and Andrew Simpson finished 11th in their first race, but turned in an improved performance in their final race of the day to finish second.

They were pipped on the line by the Brazil crew of Robert Scheidt and Bruno Prada, who are the current reigning world champions and are regarded as the British pair’s main rivals for the Olympic title at London 2012.

And in the women’s Elliott 6.0 match-racing event, Annie Lush and sisters Kate and Lucy Macgregor won their first race against Denmark, but were beaten by Spain in their second.