London 2012 Olympics: ‘Redgrave not in same class as me and Coe’ 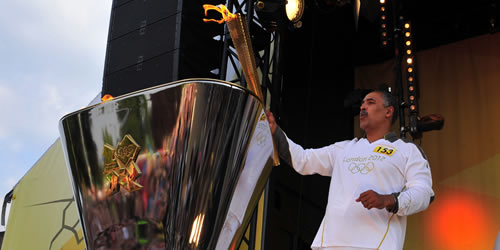 Daley Thompson believes there is no contest in the battle to be Britain’s greatest Olympian – he claims he wins hands down every time.

Thompson, a two-time decathlon gold medallist in 1980 and 1984, and Sir Steve Redgrave, the five-time rowing champion, are reportedly the frontrunners to light the flame at Friday’s £30m London 2012 opening ceremony.

But Thompson doesn’t even think Redgrave ranks a closer second behind him in the pantheon of legends.

“Why would there be rivalry? In my opinion Sebastian Coe is the second greatest Olympian, after myself,” he said, after carrying the Olympic torch in Haringey.

“Steve Redgrave is not in the same class as Seb Coe. He is a rower, but I think track and field is the toughest sport in the Olympics, which means the rewards are greater.”

It is probably fair to say that Redgrave and Thompson, a close friend of organising chief Coe, do not see eye to eye – and it is a bit of an unseemly spat ahead of Danny Boyle’s showpiece opening.

Redgrave has made no secret he believes he should be given the honour and recently wrote that Thompson didn’t make the top five of his all-time list of greatest British Olympians.

Meanwhile, the torch has just one full day of its 8,000-mile journey around the UK remaining and massive crowds again turned out to watch its progress across north London.

The flame also got the royal seal of approval when it was greeted by Prince Charles and the Duchess of Cornwall in Tottenham.