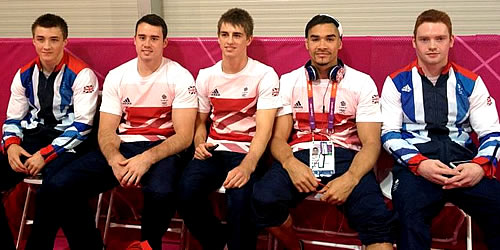 Louis Smith, Daniel Purvis, Sam Oldham, Kristian Thomas and Max Whitlock were outside hopes for a medal but shocked the crowd, including Prince Harry and Prince William, and the nation to deliver the bronze – and nearly returned the silver but for a successful Japanese appeal.

Britain’s dreams of a third London 2012 medal were realised as Team GB secured second place with 271.711, behind China on 275.997, after edging Japan and Ukraine in a nerve-wracking end.

After a fantastic performance on the floor by Purvis, Whitlock and the ever-impressive Thomas brought the Brits from fourth place to second, the North Greenwich Arena went into raptures.

But the Japanese launched an appeal to the judges after a controversial pommel horse score, which was successful, and were eventually awarded a total score of 271.952 to snatch silver – however the home crowd showed their appreciation of the historic medal.

A bright start saw Team GB sit in second place behind Ukraine after the first rotation with 45.932 as Louis Smith – who won bronze in Beijing – produced a superb pommel horse routine to earn himself 15.966.

The bars were next up as the Brits faced their supposedly weakest apparatus, but Oldham who won gold and silver in the 2010 Youth Olympics, Purvis and Thomas produced a solid performance to maintain the pressure on their rivals.

The Brits stunned eventual gold medallists China to finish above them in the qualifying heats to set up the historic final as Smith also contended for an individual pommel horse medal.

Thomas, who impressed in the qualifying heats, produced a fantastic vault to score 16.550 and ensure his team stood in second place at the half-way stage with 137.180, behind China and Japan.

And further fine performances from Whitlock and Oldham on the parallel bars left the home support daring to hope for a medal as the heavily-tipped Americans continued to falter.

Team GB suffered a blow as Sam Oldham came off the horizontal bar in the penultimate rotation to notch a disappointing 14.000, to leave the Brits’ medal hopes in the balance.

But teammate Thomas spared the 19-year-old’s blushes to earn 15.200 and put his side into fourth place, just 0.248 behind Ukraine in third, with just one apparatus to go.

Whitlock was first up and produced an impressive performance to score 15.166 before Purvis’s superb routine scored a massive 15.533 to set up a grandstand finish for Thomas.

And the 23-year-old continued his fine form with a fantastic 15.433 to send the crowd into raptures and secure his team’s place in the history books.