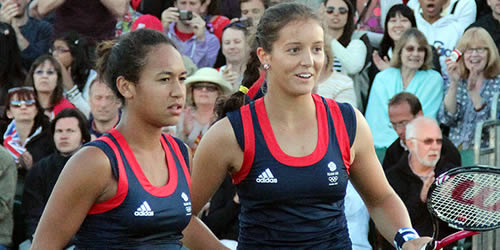 Heather Watson and Laura Robson: Both through to round two Photo: mjh0, via Flickr

Laura Robson and Heather Watson both impressed as they claimed straight-sets victories in their first-round singles matches at Wimbledon on Monday.

The 18-year-old Robson overcame Czech Lucie Safarova 7-6 6-4 to set up a clash with world No3 and third seed Maria Sharapova of Russia on Tuesday.

“I don’t feel I actually played that well because I felt very up-and-down,” said Robson. “In the second set my service games were much more solid, which was good.

“It’s always really nerve-wracking playing for your country, I just did my best to stay calm and I managed it. I think it’s just you put more pressure on yourself to play well because you are not just playing for yourself. But the crowd definitely helped me a lot today.

“It’s up there with my best wins, not just because she is much higher ranked than me, but also because it is the Olympics and we are playing at Wimbledon, which is pretty fantastic.”

When asked about her showdown with Sharapova, Robson added: “She is definitely playing really well at the moment, she was No1 in the world a few weeks ago and she is always really, really tough to play.

“I am sure it is going to be a tough match but I’ve got nothing to lose going into it. No matter who I play, I try and fight as hard as I can and that’s not going to change.”

Meanwhile, Watson will also face a Russian opponent in round two after she breezed past Spain’s Silvia Soler Espinosa 6-2 6-2, to set up a meeting with world No15 Maria Kirilenko.

Watson was in impressive form in windy conditions and spoke of her delight at beating an opponent she had never played.

I’m very pleased with that win, I knew it wasn’t going to be easy,” said Watson. “I’ve never played her before but I knew that she is a great player and wasn’t going to give me any free points.

“I played well today and I loved the crowd, they were amazing. It’s completely different to Wimbledon, they were a lot louder.”

“We have four Brits in the singles, so I think that is great. We are all loving the experience of being at the Olympics, but at the same time we’re staying focused because we want to finish with a medal.

“I think we all have a good chance and I think the home crowd definitely helps us.”