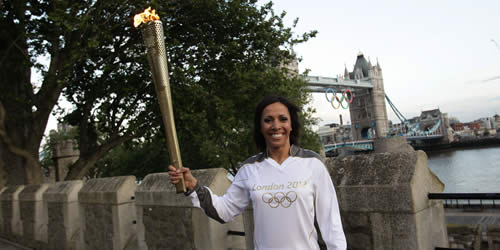 Dame Kelly Holmes holds the torch after it arrived in London on Friday Photo: Locog/Getty Images

Phillips Idowu admitted carrying the Olympic torch left him “full of emotion” as the flame started its week-long journey around London ahead of next week’s opening ceremony in Stratford.

Idowu, a triple jump silver medallist in Beijing, was raised in Hackney just a few miles from where he will go for gold in just a few weeks.

And he carried the torch through those streets as it travelled from Greenwich to Waltham Forest, via the roof of the Millennium Dome.

“I’m so full of emotion right now,” said Idowu, who is shortly due to leave for Great Britain’s track and field preparation camp in the Algarve.

“To carry the Olympic torch in my home Games, in front of my own people, it’s just an amazing thing to experience.

“Those guys did me proud with their support and I hope I can make them proud in a couple of weeks.”

Gymnast Nadia Comaneci, the winner of nine Olympic medals in the 1976 and 1980 Olympics and former basketball player John Amaechi took the flame to the roof of the Dome, which is venue for gymnastic events and basketball finals.

One of the day’s most colourful runners – even eclipsing Idowu – was local singer and actress Paloma Faith, who completed her leg in six-inch red heels.

London 2012: Final torchbearer decision all but made, claims Hunt