London 2012: From Roger Bannister to the Queen, torch fans the flames 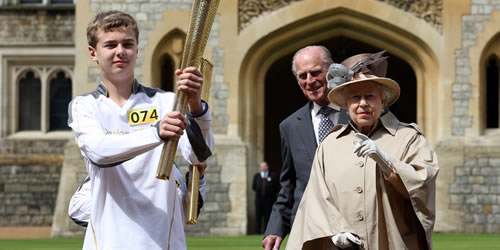 It is the third time that London has hosted the biggest sporting event in the world and part of its success in winning the honour for 2012 was the strap-line that has run like a golden thread through this Olympic campaign from its beginning to its fast-approaching end: to inspire a generation.

And while inspiration comes from those who have gone before, who have won gold, silver and bronze, or have striven but have fallen short, inspiration can also come from outside the glare of the limelight. Which of today’s unknowns may reach the lofty heights in Rio and beyond? Who will inspire them, what will spur them on?

The joy of the 8,000-mile journey of the 2012 Olympic Flame is that it brings together 8,000 inspirational torchbearers with such contrasting stories: some who have claimed the ultimate in Olympic success, some with more modest but equally uplifting achievements.

The flame began its life in Greece, as tradition has dictated since the Olympic relay was created against an altogether less benign backdrop. Hitler’s Germany used the athletic imagery of ancient Greece to enhance its own myth of a superior German civilisation.

So a post-war London decided to use a relay in the “Austerity Olympics” of 1948 to convey a very different message, and although its scope was on a different scale from its 2012 descendant, its ambition was huge. For this was a “Relay of Peace”, an 11-day journey starting from Greece, running through Italy, Switzerland, France, Luxembourg and Belgium on its way to England, and with the aim of uniting a Europe still in post-war turmoil. 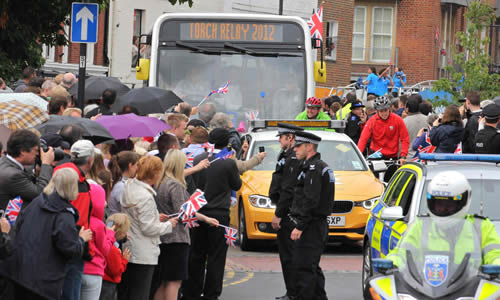 Hundreds of fans lined the streets to catch a glimpse of the London 2012 Olympic flame (Photo: Marianne Bevis)

When the torch arrived at Dover late on 28 July, 50,000 people welcomed it and a five-mile-long caravan of traffic followed the start of its overnight journey towards Wembley.

Today’s flame has also brought enthusiastic support, but shared across the nation in an unprecedented way. The torch’s journey began, 53 days ago, at Land’s End with sailing gold medallist Ben Ainslie, the starting point for more than 1,000 cities, towns and villages in the UK.

The flame will pass within striking distance of 95 percent of the population, will explore Wales and Scotland, reach the islands and highlands, and both northern and southern Ireland. It has taken in Gloucester Cathedral and Caerphilly Castle, the summit of Snowden and the Giant’s Causeway, Hadrian’s Wall and Lake Windermere, Jodrell Bank and the National Space Centre, Fountains Abbey and the Blackpool Tower, Old Trafford and Headingley.

Many of the torchbearers have inspired millions with their achievements: David Beckham, Sir Bobby Charlton, Zara Phillips, and Sir Chris Hoy, who presided over the half-way mark and a running total of four million people.

But the vast majority of the torchbearers have been encouraged to take up the flame by the very people who have stood and cheered along the route.

Take one day out of the 70. Take Day 53, an 87-mile run by 111 torchbearers that started in Oxford and concluded in Reading with the celebration party that has marked the end of each day in the relay.

This particular day began with Sir Roger Bannister at the site of his four-minute-mile triumph, the Iffley Road track, in 1954. 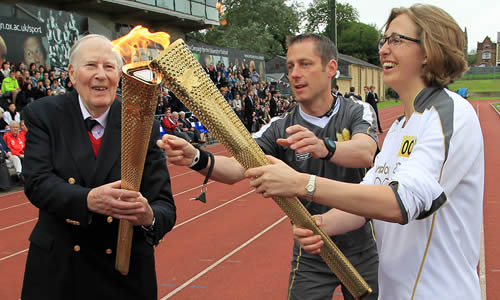 Sir Roger Bannister lights his torch at the site of his four-minute-mile triumph (Photo: Getty Images/Locog)

Further down the route was Sir Steve Redgrave who carried the flame on the river at Henley-on-Thames.

In Wallingford, it was chef Raymond Blanc’s turn and in Slough, the chef from the famous Fat Duck restaurant in Bray.

But return to 7am in Oxford, and the young woman who took the flame from Bannister and ran round that Oxford track was Oxford PhD student, Nicola Byron, who set up the Student Run Self Help Network of self-help groups for students with eating disorders: She has raised more than £60,000.

At Bisham Abbey, 22-year-old Sam Shepherd, was nominated by the public for raising thousands of pounds for charity.

In Windsor, the rugby-playing 12-year-old, Phillip Wells, carried the torch watched by Her Majesty The Queen and the His Royal Highness The Duke of Edinburgh.

And the last torchbearer of the day, Quentin Gunderson, was chosen for his work at the Lighthouse Centre in Reading. To raise money for TLG, he ran 1040 miles, the equivalent to 40 marathons, in his 40th year.

On a rainy, dismal Tuesday morning, what seemed like half of the good people of Maidenhead turned out to line their streets and take photos as proof that they were part of what, for most, will be a once-in-a-lifetime event: The Olympics on home soil.

The young woman who trotted past curbs lined with small, red-clad children and pavements packed with flag-waving well-wishers, beamed as the flame licked the air above her neatly-plaited blond hair. Abi, a student at a school for pupils with learning difficulties, took Jamie’s Home Cooking course, created meals that suited her sporting lifestyle and helped her family to eat more healthily. She completed the course with a family recipe book designed to evolve as it is passed down the generations.

Along the road, where the A4 crosses the Thames, local pupils compiled interviews and photos for a school project to record the occasion for posterity. In the process, they came across a man who had carried the flame in that 1948 relay—and they took turns proudly to hold his torch.

Years from now, should the Olympics return to these shores, how many others will be doing the same with today’s torches? For it is surely such moments and memories, as much as the medals won by the fastest, highest and strongest, that will continue to inspire future generations.