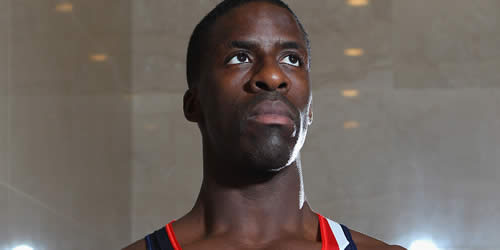 Team GB chief Andy Hunt has insisted he would be happy to sit down with Dwain Chambers to clear the air ahead of the London 2012 Olympics.

Chambers unsuccessfully took the British Olympic Association to court in a bid to earn his place on the 2008 Olympic team.

And the BOA invested thousands of pounds in legal fees in a bid to prevent his – and other convicted doping cheats – participation at London 2012, an argument they ultimately lost at the Court of Arbitration for Sport in Lausanne.

Chambers was also heavily critical of the BOA, in particular chairman Colin Moynihan, who he accused of hypocrisy, in his autobiography Race Against Me.

“I’m very happy to sit down with Dwain and talk about any issues, he’s part of the team and I want him to succeed and I don’t want to create any divisions,” said Hunt.

“We always said once our bylaw fell away that any athlete that is eligible would be welcome into the team.

“Every athlete will get the same support, there is no two tier team. We will embrace any athlete selected but set a high standard for everyone to be part of this Team GB and he expect Dwain and others to abide by that.”

Chambers and shot putter Carl Myerscough, who served a two-year doping ban in 1999, were both included in the track and field squad announced by UK Athletics head coach Charles van Commenee.

Hunt also claimed he was not concerned by the fact none of the 71 named will take part in the opening ceremony, instead they will stay in their Algarve training base and won’t fly into London until just before their competitions.

“It’s not disappointing they won’t march in the opening ceremony because performance comes first,” he insisted.

“The British public will largely judge the success of these Games by the success of the team. My duty is to make sure we have the best athletes competing for us and if we give them the best possible support, then hopefully the medal table will take care of itself.”

Hunt has steadfastly refused to make a medal prediction for the Games, insisting his only target is to win more medals in more sports than ever before.

But UK Sport, Britain’s elite funding agency, will on Wednesday publish their medal expectations for the Games and underline their belief that Team GB should repeat their fourth place finish on the medal table from four years ago.