Mathieu Debuchy is reportedly close to a move to Newcastle United, prompting a huge flurry of reaction on Twitter 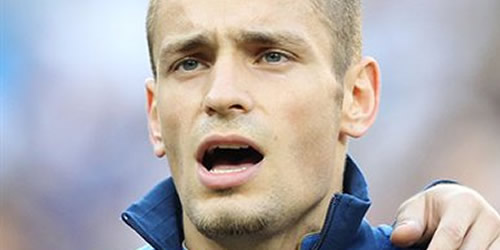 Mathieu Debuchy has been heavily linked with a move to Newcastle Photo: Football.ua, via Wikimedia

Mathieu Debuchy continues to be linked with a move to Newcastle United, with Magpies midfielder Yohan Cabaye urging the Premier League club to sign the defender on Monday.

Debuchy was one of the stars of the France side that reached the quarter-finals at Euro 2012, and Newcastle supporters have voiced their desire to see the 27-year-old seal a move to St James’ Park this summer on Twitter.

James Perch ‏(@hairymonster96) can’t understand the delay: “Debuchy should be signed asap, he said he wants to play for Newcastle, sign him whatever the price! #clearlylovesthetoon”

Nick Williams ‏(@Geordie_Nick) is frustrated by all the mixed reports: “So now they’re saying a fee has been agreed. To go with the fact that terms are already agreed. So… Where is he then eh? #NUFC #Debuchy”

Alan NUFC Sharp (‏@NufcSharp) urges Mike Ashley to sort out a deal: “Cabaye trying to get his team mate Debuchy at Newcastle united :)#NUFC #football Up to Mike Ashley to do the business!”

Ryan Jennings ‏(@ryanjennings13) calls on Alan Pardew to finalise a deal: “Debuchy is desperate to come, Cabaye even said so, what are you waiting for Pardew? Quality full-back… put the extra million in and seal it!”

Evan Ross ‏(@evanross6) is excited at how Newcastle’s squad is shaping up: “Wow if we manage to get Debuchy, Anita and Remy through the door we really will be the real deal #NUFC!”

While Alex Chapman ‏(@_archapman) reckons Debuchy and a new centre-half would seal a six-place finish again: “If we sign Debuchy and a back-up centre-half, I see no reason why we can’t finish in the top six again #nufc!”

Alex Chapman (‏@_archapman) wants the deal done: “I’ll be delighted once we finally get Debuchy over the line #nufc. Hoping #NUFC get some transfer business wrapped up by the end of the week. #InCarrWeTrust #Debuchy #CurtisGood”