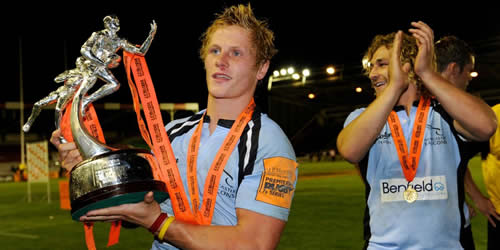 The club’s academy took Gray, 21, from Barnard Castle graduate to fully-fledged professional under their tutelage before he signed for London Irish last summer.

And their handiwork in nurturing Gray’s talent also caught the eye of England Under-20s head coach Rob Hunter who saw the No8 fit to captain his side throughout 2011.

But Gray believes fewer north-east schoolboys will be able to follow his path this season as the Falcons will be competing in the Championship – London Welsh having taken their place at English rugby’s top table.

“The North needs a rugby team, a top-flight rugby team, because there’s a lot of good rugby schools and rugby clubs in that part of the country.

“That’s how I became affiliated with the Newcastle Falcons.

“The closest team now would be Sale and they’re in Manchester and that’s a long way for a lot of boys to be scouted from.

“It’s a shame because rugby’s growing up there and they’ve put a lot of work into the grass roots of the game.

“When I was there the players did a lot of work in the community, more than you’d probably expect really.

“The thing about Newcastle is they’ve always had good youngsters coming through, it’s always been the dilemma if the players leave, me being one of them, but hopefully they’ll sort themselves out because I think for the good of the game, England needs a northern club in the Premiership.”

Had he not moved down south last year, Gray would now be preparing for the Championship himself rather than the Premiership’s annual precursor, the JP Morgan Asset Management Premiership Rugby 7s Series which starts this Friday.

The Falcons lifted the trophy in 2011, beating then-Premiership champions Saracens in the final and as fast as his old club fell, Gray believes they can bounce back in the same timeframe.

“Is it the worst thing [relegation] for them? I don’t think it will be,” he added.

“Northampton went down and look where they are now, they’re a consistently top-four team and Harlequins went down and came back and won the Premiership.

“They’re going to keep relatively the same squad as last year and all they’ve done is add to it so they’ve got to look at it as a rebuilding year and come back up straight away.

“Hopefully they can sort themselves out and with a good backer and good coaches they can hang on to their players and become a successful club.”

The JP Morgan Premiership Rugby 7s Series kicks off on 13 July at Harlequins, with rounds at Sale Sharks and Gloucester Rugby, and the final at Bath Rugby. Visit: www.jpmorgan7s.com to find out more.