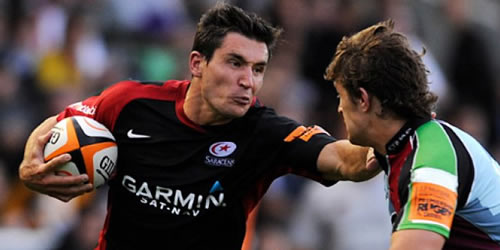 After a knee injury kept him on the sidelines last year, Nils Mordt remains confident that his return to the Saracens side will see them regain their J.P. Morgan Asset Management Premiership Rugby 7s Series crown.

In the competition’s first year in 2010, Mordt was a key figure in the Sarries side that stormed to the title, defeating Newcastle in the final, before continuing their silverware trick by landing the Aviva Premiership title.

But with Mordt, who has represented England internationally at 7s, absent through injury in 2011 the Falcons got their revenge as they upset the odds in the final.

But Mordt has now been restored to the Sarries line-up and will skipper the north London side when they take their first step on the road to the title on Friday at the Twickenham Stoop.

Saracens will face off with Harlequins, London Irish and London Wasps in the first leg of the Series, that culminates in the Final at Bath on 3 August and Mordt is itching to set the record straight.

“The JP 7s is always a great way to start the season,” he said.

“It’s a fantastic opportunity for the youngsters to put their hands up for selection and for me personally it will be great to get out and play some competitive rugby.

“7s is always fantastic for the fitness, we’ve not been back in pre-season long so no doubt it’s going to be a real blow out.

“But at the end of the day we want to win the competition, any tournament Sarries enter we play to win and this is no different.

“I was in the side that won it two years ago and I would love to be able to win it back and with a proper pre-season this time around I’m feeling good.”

Mordt will skipper a young Saracens side that looks set to include the likes of England Saxons scrum-half Ben Spencer as well as forwards Jackson Wray and Will Fraser, both of whom made sizeable contributions for Sarries in the Premiership last season.

And at 28, Mordt admits that he will probably be playing the role of elder statesman when the tournament gets underway this weekend.

“I think I’m in the side to guide the lads really,” he added.

“If that means they do all the running for me then great! 7s is a tough sport physically but that will be good for us and I’m excited to see some of our youngster in action.

“Someone like a Nathan Earle has really impressed me, he’s got serious gas and it should be exciting for the crowds to watch.”

The J.P. Morgan Premiership Rugby 7s Series kicks off on 13 July at Harlequins, with rounds at Sale Sharks and Gloucester Rugby, and the final at Bath Rugby. Visit: www.jpmorgan7s.com to find out more.

London 2012: From Roger Bannister to the Queen, torch fans the flames