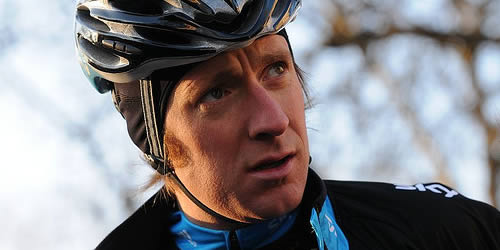 The 32-year-old finished in the chasing peleton around the streets of Paris, to secure the prestigious title by a winning margin of three minutes and 21 seconds.

Wiggins’ achievement, just a week before the start of the London Olympics, was roundly praised on Twitter, with seven-time winner Lance Armstrong leading the tributes.

Lead singer of The Farm, Peter Hooton ‏(@TheFarm2012) offers Wiggins a prize for winning the Tour De France: “Congrats to Liverpool fan Bradley Wiggins! If he wants a ticket for the match he can have mine as long as comes and fixes my bike in the shed!”

Former England rugby star Brian Moore (‏@TAFKAbrianmoore) reckons Wiggins is now favourite to win the Sports Personality of the Year award: “Bradley Wiggins a winner and a personality – shall we give him SPOTY now?”

Brendan Gilbert ‏(@onlyoneboykie) hopes Wiggins will carry his form into the Olympics: “Man of the moment has to be Bradley Wiggins!! Sensational achievement, and to think they have the Olympics in 6 days #class!”

David ‏(@DavidClearskies) recalls the success of Irishman Stephen Roche over two decades ago: “Well done Bradley Wiggins. It takes me back to Stephen Roche’s win back in 1987!”

While Alex Gordon ‏(@AlexGordon_) believes it is up there with the best British achievements in sport: “Bradley Wiggins take a bow son! One of the best achievements by a British sportsman ever. #inspiring”

Peter Spencer ‏(@PeterSpencer88) says bring on the Olympics: “Congratulations to ‘local lad’ Bradley Wiggins, what an achievement! Is this a sign of things to come over the next few weeks #jubilympics?”

Jude Pidgeon (‏@judepidge) is disappointed by the prospect of no more cycling to watch – at least for a week until the Olympics start: “Brilliant! Well done Bradley Wiggins and Mark Cavendish. Don’t know what I’ll do now with no Tour to watch!”

Finally, Terry Hodgkinson ‏(@terry602000) cannot resist a dig at the French: “Bradley Wiggins wins the Tour de France but it is not even the lead story on French TV news. I wonder why? Bad losers, that’s why.”