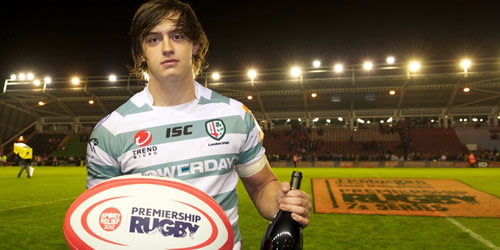 Alex Gray was named player of the round as he helped London Irish to the finals in Bath Photo: onEdition

Alex Gray spearheaded London Irish’s charge into the final round of the JP Morgan Asset Management Premiership Rugby 7s Series as the Exiles’ star-laden team finished second to Saracens in the series opener at the Stoop.

Gray scored two tries and showed why he was England Under-20s captain last year with three barnstorming performances, earning the player of the round award.

But he could not prevent 2010 champions Sarries from topping the group by points difference even though one try from himself and another from Conor Gaston earnt them a 14-12 victory over their north London rivals.

The Exiles, who had brought the likes of centre Shane Geraghty, wing Topsy Ojo and No. 8 Chris Hala’ufia to play in south west London, were undone by hosts Harlequins in their first match.

But Quins fell 33-0 to Saracens in their next game with wing James Short, who scored a try in each match, opening up affairs.

London Wasps, led by centre Chris Mayor, lost all three of their encounters going down 35-0 in their last game to Quins with captain Will Skinner running in a 50-metre try to the delight of the home fans.

Miles Mantella also crossed twice to leave Quins with two wins but no place in the final, missing out by a single point.

After the Exiles’ passage to the finals was assured a relieved Gray set his sights on Bath on 3 August.

He said: “It wasn’t quite how we would have liked to do it, obviously losing our first game but we probably needed that to snap us back into it because it was probably the first time some of these guys have played sevens, I know it is for me, since school at least.

“Now we’re through to the finals so you have go to be happy with that and we can come back in two weeks time and have a crack at the finals in Bath.”