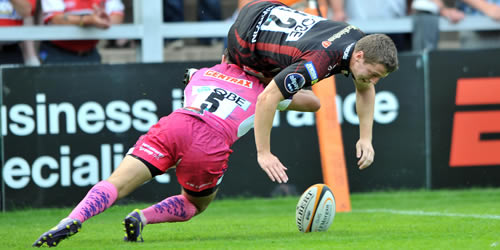 Gloucester claimed a first title under new boss Nigel Davies as they won the third leg of the JP Morgan Asset Management Premiership Rugby 7s Series at Kingsholm to book their place in the finals next Friday.

The Cherry & Whites will be joined at the Rec by Bath, who finished second, while Saracens, London Irish, Sale and London Welsh had already qualified.

With a star-studded line-up including England Saxons pair Freddie Burns and Jonny May Gloucester looked a class act, but it was one of their lesser-known lights who stole the show.

Diminutive winger Ian Clark collected the player of the round award as he racked up six tries, including a hat-trick against Bath in the final match to top the pile ahead of their fierce rivals.

A star with Hartpury College last season, Clark showed his pace and elusiveness as he crossed in every game, while May also impressed, creating several tries for the home side.

Clark admitted the atmosphere at Kingsholm had really inspired him.

“As you’re running out in front of the Shed and they are shouting ‘Gloucester’ you get goosebumps across the back of your neck,” Clark said.

“It really makes you want to perform. I really feel I’m part of what Gloucester’s all about. All the young guys, Jonny [May], Henry [Trinder] and Freddie [Burns] know what it’s like to be the small guy in a team and they got me into space to finish off the tries.”

The home side had kicked things off in impressive style as they beat Exeter first up, 36-7, with Clark grabbing a double and Dan Robson, Gareth Evans, May and Shane Monahan scoring the rest.

Bath matched that result by downing Worcester 35-12 – Tom Biggs and Rich Lane scoring two tries apiece – before Olly Woodburn’s brace, along with another from Biggs saw Bath past Exeter 19-12.

Worcester needed a win in their next game to stay in it, but despite two tries from David Lemi they came up short against Gloucester, going down 33-24.

That meant the Warriors’ clash with Exeter had only pride at stake, but it was arguably the game of the night with Luke Treharne’s conversion of Mike Pope’s score giving the Chiefs a 26-24 win.

The stage was set for a local derby in the final game – and it was Gloucester who came out on top thanks to the irrepressible Clark, two tries from Lane proving in vain for Bath.

However Danny Grewcock’s side will get their chance at revenge next Friday when they host the finals of the competition at the Rec.

Hungarian Grand Prix 2012: Three titles would be a ‘dream’ – Alonso