Red Bull chief keen to tie Mark Webber down for 2013

Christian Horner says Red Bull are keen to tie down Mark Webber to a new contract, with his current deal set to expire this year 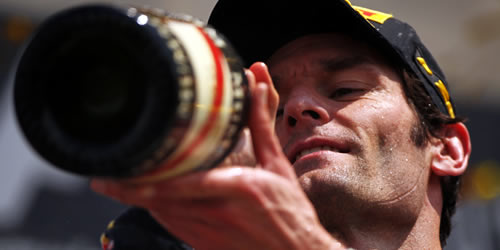 Christian Horner is hoping to keep Mark Webber at Red Bull in 2013 and is expecting talks to being in the next few weeks.

The Australian clinched his second win of the season at the British Grand Prix at Silverstone, where he overtook Ferrari’s Fernando Alonso late in the race to seal Red Bull’s third victory in four years at their home circuit.

Sunday’s triumph places Webber second in the drivers’ standings, 13 points behind leader Alonso and 16 ahead of third-placed Sebastian Vettel.

And Horner admits the Milton Keynes-based outfit are keen to tie the 35-year-old down to a new deal, with his current year-long contract set to expire at the end of 2012.

“Absolutely [I want Webber to stay]. As always with Mark, things are pretty straightforward. He’s been with the team for seven seasons and he’s had all his success in Formula One with that team and we’d like to see that continue,” said Horner.

“I think, very simply, we have a great relationship with Mark. Mark wants to be in the team next year and therefore, as we’ve always stated, in the summer we’ll sit down and talk about the future. That period of time is obviously coming up pretty close now, so over the next few weeks we’ll be talking about 2013.

“Inevitably there’s an awful lot of speculation surrounding Ferrari, but we’re only focused on ourselves and we can’t control what other people say or do. I think Mark feels comfortable with the team and over the next few weeks we’ll sit down and talk about the future.

“It was inch perfect, and the move he made on Fernando, again it was absolutely spot-on. It’s a circuit Mark’s always excelled at and it was great for him to win for the team at our local race.”