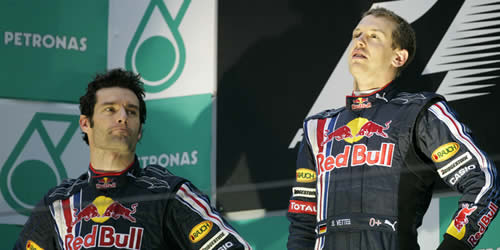 Sebastian Vettel says he would be happy to continue alongside Mark Webber at Red Bull and insists the pair “work well together”.

Webber, who won the Monaco Grand Prix in May, is out of contract at the end of the season and has been linked with a move to Ferrari.

But defending double world champion Vettel believes the Australian is doing a “very good job” – even if the duo are not the best of friends away from the sport.

“I can understand why people are thinking that there is a problem between Mark and myself,” said Vettel. “Yes, we might not be best friends, but I have no problem with him and he has no problem with me.

“We work well together and we are both trying to pull the team in the same direction. We have a similar view for the car, it’s not as if one likes the set-up in the opposite way to the other.

“I think that is helping us, and so far it is working quite well. I’m not sure of his contract, but at the moment I think he is doing a very good job.”