Roberto Mancini: The opportunity at Manchester City is enormous 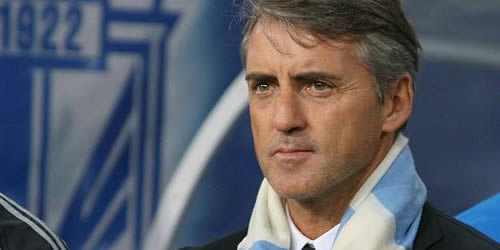 Roberto Mancini took over at Eastlands in 2009 Photo: R Goraczniak, via Wikimedia

Roberto Mancini has admitted his delight at signing a new five-year deal at Manchester City which ties him down to the club until 2017, saying he is relishing the “enormous” opportunity for further success at Eastlands.

The Italian’s deal is understood to be worth at least £25m and news of his signing comes soon after the 47-year-old was heavily linked with the Russia national team job.

“I am delighted to be able to give all of my efforts to Manchester City for a further five years,” said Mancini.

“The opportunity which exists to build on our recent success is enormous. Manchester City is a fantastic football club, from the owner, chairman, board and the executive team, through to the players, staff and fans.

“I am very much looking forward to the challenges and excitement ahead.”

Mancini led City to their first Premier League title in 44 years last season after guiding the Citizens to the FA Cup in 2011, their first trophy in 35 years.

John MacBeath, City’s interim chief executive officer, said: “Roberto’s managerial credentials have been well proven in Europe for many years and in leading a team which has won the FA Cup and an unforgettable Premier League title in successive seasons, his ability to manage in the English domestic game is also undisputed.

“This new agreement allows Roberto to focus on the challenge of guiding a team which is capable not only of defending the Premier League title, but one which can compete for European honours.”

• Mancini spent the majority of his playing career in Italy, winning Serie A titles and Uefa Cup Winners’ Cups with both Sampdoria and Lazio as well as six editions of the Coppa Italia, four with Sampdoria and two with Lazio. Capped 36 times by Italy, the forward was a bronze medallist at the 1990 World Cup.

• He started his coaching career as assistant to Sven-Göran Eriksson at Lazio before replacing Fatih Terim at Fiorentina in 2001. After leading Fiorentina to the Coppa Italia, he returned to Lazio and repeated that feat as well as steering the Roman club into the Champions League and to the Uefa Cup semi-finals in 2002/03.

• He became coach of Inter in July 2004, replacing Alberto Zaccheroni one day after terminating his contract with Lazio; led the Nerazzurri to Coppa Italia glory in his debut season, Inter’s first domestic honour since the 1989 Scudetto.

• After Juventus were stripped of their 2005-06 title and AC Milan suffered a points penalty, Inter were finally crowned champions of Italy again. Mancini repeated that success in 2006-07.

• Mancini left Inter in May 2008 despite winning another title. He replaced Mark Hughes as manager of Manchester City midway through the 2009-10 Premier League season, signing a three-and-a half year deal.

• City finished fifth in his first season and third in his second, when they also won the FA Cup, their first trophy in 35 years.