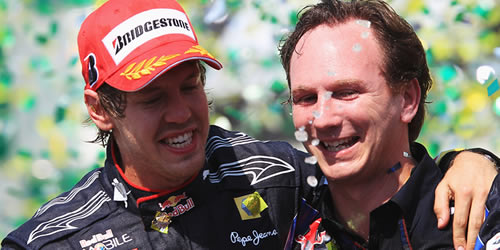 Christian Horner insists Sebastian Vettel has not signed a pre-contract agreement with Ferrari, despite speculation linking the Red Bull driver with a switch to the Italian team.

Reports claimed that the German double world champion has agreed to join the Maranello-based outfit for 2014 – but Horner has dismissed the link, insisting it is pure speculation and claiming that the 25-year-old is “very comfortable” at Red Bull.

“I have spoken with Sebastian about it and he’s made it quite clear that he hasn’t had any dialogue and hasn’t signed anything with Ferrari,” Red Bull team principal Horner told Reuters. “The rumour mill always will continue.

“I think most of our team has been going to Ferrari at some point this year, whether it be Adrian [Newey], Mark [Webber], Sebastian, even myself at one stage was supposed to be going.

“I don’t think Ferrari is a must for him. He’s very happy where he is, achieving great results where he is and he’s focused on trying to achieve a lot more.”

Horner’s comments come after Ferrari team principal Stefano Domenicali sent the rumour mill into overdrive by claiming that Vettel and Fernando Alonso could “co-exist” together at the Italian team.

“I think they are both intelligent guys and they could easily coexist together,” he said last month.