Tour de France 2012: Bradley Wiggins worthy of all the praise

After smashing all sorts of records and heading straight into the Olympics, Bradley Wiggins deserves all the praise he is getting 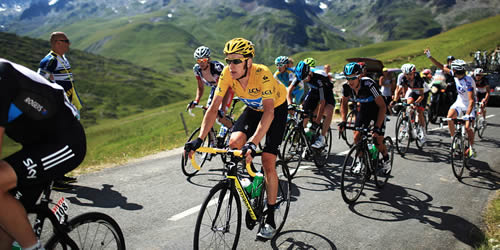 Leaping onto his team’s car, bowing to his adoring crowd, Bradley Wiggins was in his element on Sunday having just become the winner of the Tour De France and achieving a lifelong dream.

You wouldn’t have thought that he’d just completed three weeks of grueling cycling, after 2,173 miles and over 87 hours in the saddle.

He seemed incredibly fresh as he raised his arms in a victory salute, which fails to demonstrate the magnitude of his achievements.

Firstly, he is the first Briton to win the world’s greatest cycle race since its inaugural year in 1903.

In fact our previous best position was fourth, last accomplished by Wiggins in 2009 and also by Robert Millar back in 1984.

To complete the high for British cycling in Paris, Mark Cavendish blew away his competition to win the sprint finish and another Brit, Christopher Froome ended up second on the podium behind Wiggins.

The French media even lapped up the British success, labeling the tour the Promenade des Anglaise!

To put it into context, that’s like Andy Murray beating a fellow Brit in the final of Wimbledon. It’s a monumental outcome for British cycling.

The Tour De France may not be too familiar with the majority of sporting fans in the UK but in short it’s a gladiatorial test of mental and physical endurance for cyclists who climb the Alps and Pyrenees, while also throwing in a couple of sprints and time trials.

So you get it, the Tour De France is a beast. Therefore, after Saturday’s time trial, the penultimate stage of the tour, Wiggins went into Paris a massive 3 minutes and 21 seconds ahead of Froome.

Say two laps ahead of his rival in a Formula 1 race. Yes, it’s hard to compare sports but the gap he held over his rivals was scary.

The dominance of Wiggins’ win highlights the magnitude of his victory perfectly. He managed to contend a brutal mountain stage to grab the Maillot Jaune after stage seven and never looked back to maintain the jersey until the Champs Elysee.

Adding to this accolade, Wiggins is the first track cycling Olympic gold medalist to have won the tour. He has well and truly conquered the world of cycling.

He hasn’t been alone in his quest for glory. His current team, Sky, have provided Wiggins with the perfect platform to achieve his ambitions.

Under the thorough stewardship of Dave Brailsford and Sean Yates, the team controlled the majority of the race, setting the pace, going on attacks or reeling in the rebel riders.

The organisation, commitment and attention to detail by the team need to be lauded no end. Cycling isn’t an individual team sport but Wiggins has made this tour his combining superb efforts in the time trials, mountains and even having the energy to lead Cavendish out in Paris!

The dust has settled on the Champs Elysee after this truly historic weekend for British cycling but the Tour De France’s victor is already back to work.

Following his spectacular dominance of the tour, Wiggins has returned home to Lancashire and has already been seen out and about pedaling around his home town.

His dedication and love for the sport is staggering. Despite only seeing his family for five weeks so far this year, the 32-year-old is already back in the saddle preparing for this weekend’s Olympic Road Race.

Here, he will form part of the lead out train to hopefully propel fellow Sky team-mate Mark Cavendish to gold glory.

The world champion sprinter had a fairly subdued Tour De France despite winning three stages. In fact, Cavendish broke a series of records himself despite openly aiming for Olympic glory this weekend at a detriment to his tour efforts.

Cavendish became the first road race world champion to win the final stage on the Champs-Élysees. A stage he is still unbeaten on, after winning his forth successive stage.

Furthermore the Manxman is now forth in the all-time ranks for stage wins on the Tour De France, with 23 now under his belt in only five tours, he stands 11 behind the legendary Eddy Merckx, who won 34.

Therefore after helping Cavendish, Wiggins will attempt to win a seventh Olympic medal in the time trial event next Wednesday.

His devastating speed in the time trials was where he built up his tour lead, and at an average of 31mph, no one could even compete.

It will be another defining week in the career of the Wiggins but if he fights and rides like he did on the tour, it’s hard to look past him as a certain bet.

So, in just over a week’s time ‘Wiggo’ could have a ‘Maillot Jaune’ and another Olympic Medal to add to the ever growing trophy cabinet on his farmland in Lancashire.

Only then will he allow himself to reflect on the enormity of his accomplishments.

Hyperbole is often overused in sporting achievements but after 87 hours in the saddle, smashing all sorts of records and heading straight into the Olympics, Wiggins deserves all the praise he is basking in.