Serena Williams, aiming for her fifth Wimbledon title, will play Agnieszka Radwanska in the final at SW19 on Saturday 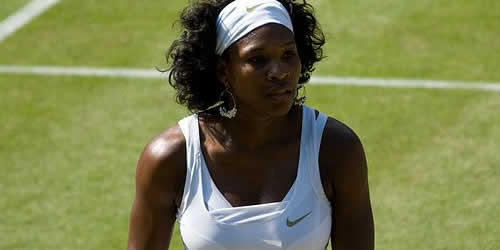 Serena Williams is a four-time champion at SW19 Photo: C Eason, via Flickr

Only one of the women’s semi-finalists may have lifted the Wimbledon trophy before, and only two of them may have experienced Grand Slam victory and the rarefied air of the No1 ranking, but the quartet who contested those precious places in the final had arguably been the form four of 2012.

Victoria Azarenka, still able to walk the concourse at the All England Club with barely a glance, began the year in dazzling style, winning 26 straight matches and four straight titles: Sydney, Doha, Indian Wells and her first Grand Slam in Australia. It took her to No1 until Maria Sharapova won the French Open, and a win in her semi would reclaim the top spot.

The other woman chasing the No1 ranking, Agnieszka Radwanska, needed her biggest adversary, Azarenka herself, to lose her semi-final. She also needed to win both her semi and the final. But Radwanska was enjoying an excellent run dating back to last autumn. She had, incrementally, climbed the rankings to a career-high last month of No3 and won titles in Dubai, Miami and Brussels this year.

In her first Wimbledon semi-final, she played the other new woman at the top table, the left-handed German, Angelique Kerber, who reached a high of No8 last month with two titles in Paris and Copenhagen.

The fourth woman was one of the most feared in tennis, Serena Williams. With four Wimbledon singles crowns to her name already—the first a decade ago—she was playing in her 21st Grand Slam semi-final, her eighth at Wimbledon. And this year, she too had won two titles, in Charleston and Madrid.

And while she had suffered a blip in the middle of her 13th Wimbledon campaign, pushed to three sets first by the No32 seed and then by a wild card, that served only to sharpen her game. Back on Centre Court, she powered through the defending champion, Petra Kvitova, with surprising ease in straight sets.

But while the Azarenka-Williams blockbuster had the hallmark of a classic, the match-up between the two women aiming for their first Major final also promised much. They had played one another only four times and split the honours. What’s more, their three completed matches had all gone to three sets.

It was crammed with contrast: Radwanska full of tactical guile, touch, variety and unconventional shot-making, Kerber big on power and angle from the baseline but happy to rush the net too.

In the early stages, it was the latter who dominated, with Kerber focusing her firepower at the Radwanska backhand and drawing errors. It won the German a break in the third game but by the sixth, Radwanska had got a better read on her opponent, sliced to the lines and angled her low-flying balls past the Kerber racket. With the break back, the crowd revealed its colours. Radwanska was voted the WTA Fans’ Favourite of 2011, and her calm demeanour and compelling style of play made her the popular choice here, too.

The strength of her backhand began to shine, defensive and attacking, cross-court and down the line by turn. She fended off Kerber’s ammunition and quickly turned defence to offence to break again in the eighth game. She served out the set, 6-3, confidently picking off smashes along the way to show just why her game suits grass so well. Indeed Radwanska won the junior title here in 2005 and had twice been a quarter-finalist in her six Wimbledon appearances.

In the second set, Kerber tried to regroup against the fleet feet and nimble racket-work of her Polish opponent, but Radwanska became impregnable. She broke early in the second set, taking her chance at the first attempt, and held the advantage for the remainder of the set to close out the match in a tidy hour and 10 minutes, 6-4.

She and Kerber are good friends—the German has Polish grandparents—but a beaming Radwanska pointed out that, on court, they are just opponents. She added:
“This is what I dreamt of since I was a kid: It’s the best two weeks in my career.”

Radwanska has all the tools. Today, she served well, at 78 percent, volleyed well, 14 winners from 17 approaches, and made just six unforced errors—only one in the second set. But she will need to replicate that performance, and more, if her best two weeks are to get even better.

Over the net, on Saturday, she will face the truly formidable presence of Williams, who she has played twice before, losing both times—including the quarters here in 2008.

What’s more, Williams has been doing what she does best: working herself into her best form as the tournament goes on. Azarenka posed a major obstacle to Williams’ ambitions for a fifth Wimbledon title, but then many thought Petra Kvitova would be the same. But a quick look at their past record showed that history was largely on Williams’ side. In eight previous meetings, Azarenka had won only once, and it was not at Wimbledon in 2009. On that occasion, the woman from Belarus won just five games.

Azarenka is a more complete, more focused, more experienced player now than then, but even so, things looked bleak after half an hour of play. Williams had lost just one point on her first serve, made 20 winners and capitalised on her first break point in the eighth game. She moved well, she tracked down drop shots, she thumped her overheads and hit her backhand like a rocket. This was Serena in full pomp, and she took the set, 6-3.

Azarenka, though, dug deep in the second to recover from an opening double fault and hold her serve but could find little answer to the rain of winning serves that came down upon her. Williams took her opening game with three aces and then hammered a cross-court backhand past an advancing Azarenka to break in the third. The Williams serenity disappeared for a moment with a huge “C’mon” before the mask came down, she refocused and served for a 3-1 lead.

Only briefly did the Williams guard drop: She missed a few first serves in the fifth game and Azarenka pounced on the backhand wing to draw an error and the break back.

Williams threatened to break again in the next, but Azarenka’s serve held up all the way to a deciding tie-break. Indeed, it held strong through the tie-break, too, and it needed to. The pressure, from serve and forehand together proved just too great at 6-6, and Azarenka netted a backhand to give Williams match point, which she took, with immaculate timing, with a 24th ace.

In one stroke, Williams broke her own Wimbledon record of aces, set earlier this week, reached her 18th Grand Slam final and became the first 30-year-old woman to do so here since Steffi Graf in 1999.

For Radwanksa, the door to the No1 ranking is still open. With Azarenka out, the Polish woman has simply to beat Williams on Saturday.

That seemed an improbable scenario when the tournament began fewer than two weeks ago. It still looks an improbable task—but it remains possible, and there’s no doubt that this slight, popular woman will be true to her word: “I will do everything in my power to be No1.”