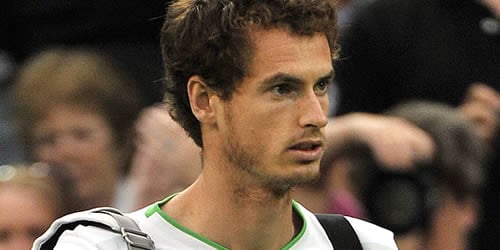 Andy Murray will meet Jo-Wilfried Tsonga in the semi-finals at SW19 Photo: Head

As the sky cleared of rain clouds and the wind dropped to a balmy breeze, it seemed barely conceivable that, two hours before, play was halted in this very spot as a shower descended through the open Centre Court roof. But it was true: Now the opening was simply blue and white.

Perhaps it was an auspicious sign. For the man taking to court may live near Wimbledon, may carry the hopes of the British nation seeking a Wimbledon champion, may play for GB in the Olympics in a few weeks’ time, but Andy Murray was born under the blue and white flag of Scotland.

There were more good signs, as people had been telling him all week. First the biggest danger in his half of the draw, Rafael Nadal, fell unexpectedly early.

With Murray losing to Nadal in all three of their Wimbledon meetings—and for the last two years in the semi-finals—that had to be a good thing, though he denied it was an issue: “Just because I lost to him a few times doesn’t mean I’d never want to play against him. I don’t mind playing against Rafa.”

If Murray was to reach his fourth straight Wimbledon semi-final, he had ‘only’ to beat a man, in David Ferrer, who many insisted was a clay-court expert, especially since the Spaniard beat Murray in the French Open quarters less than a month back.

The two had never met on grass in 10 meetings, but Murray was quick to quash the notion that this surface would suit the home player better: “[Ferrer] a clay-court specialist? No, he’s not. He won last week on grass, so he’s won eight matches in a row on the grass. He’s been in the semi-finals of Australia, I think semi-finals of US Open, as well, and now he’s starting to play better on grass. I don’t see him as a clay-court specialist at all.”

Murray was right. Whichever way you looked at it, Ferrer was a formidable opponent, as his dominant, attacking win over Juan-Martin del Potro demonstrated. A pro on the tour of 12 years’ standing, Ferrer had this year alone won four titles and his last 18 months had produced the best Grand Slam results of his career, culminating in his first French Open semi last month.

So the start of the match did not look auspicious at all. In fact, it opened worryingly like Ferrer’s match against del Potro. In the second and third games, both he and Murray faced two break points on serve and both men survived, but again in fourth, Murray’s serve came under pressure, and this time Ferrer made the break to lead 3-1.

The games were long, the defensive skills sometimes extraordinary, and their hitting from the baseline deep, varied and powerful, but Ferrer made the fewer errors and turned defence into attack more eagerly.

Serving for the set at 5-3, Ferrer found an ace and then danced around a backhand to make a searing off-forehand winner to lead 30-0, but Murray hit back, chasing hard, throwing in a drop-volley and lob to earn a break point. A cross-court backhand winner gave him another chance and a forehand winner past the net-rushing Ferrer onto the sideline brought the crowds to their feet. It was 5-5 and they headed to a tie-break.

Murray took the first advantage as he held off Ferrer in a long cross-court backhand exchange but the Spaniard hit a purple streak with a couple of winning forehands and a scampering pick-up of a drop-shot for a clean put away. Both were expending huge reserves of energy to stay in every point but at 5-5, Murray blinked first, found the net and a big serve from Ferrer took the set.

But that one-hour opener was just the start. The next set went fractionally longer—by two minutes—and with just as much tension. Murray got an early break point but Ferrer stuck with his successful game plan of deep, wide angles waiting for a short return to ghost in for the put away. He held, and then it was Murray who came under pressure in the seventh game, but the Scot found two straight 130 mph serves to hold.

In the ninth game, though, Ferrer did break, but then he overhit a couple of forehands, too eager to ride his momentum to the second set. Murray levelled, and again, it went to a tie-break.

This time, Ferrer took the early lead, tracking down a drop shot in a flurry of skittering feet. He went 3-0, Murray then aced and made a drop-shot winner, before Ferrer extended his advantage to 5-2. The Murray serve came to his rescue again and then he bettered Ferrer in a long baseline rally. Two more big serves and he the set was his—and the crowd was on its feet.

When Murray took the third set in a ‘mere’ 41 minutes, breaking in the ninth game and serving out with an ace, 6-4, it looked as though things would reach their climax quickly. But Ferrer is one of the toughest, most focused players in the sport and he had no intention of letting up. Still they played toe-to-toe, finding baselines and sidelines with depth and angle, on forehand and backhand.

Now, though, it seemed that Murray had the edge. His backhand in particular was flowing and his serve became increasingly destructive: He cranked up to 85 percent on his first-serve in this concluding set and dropped just three points out of the 29 he struck.

But break points were a scarce commodity and it headed again to a tie-break, and again it was nip-and-tuck. Murray took the first point against serve with a down-the-line backhand winner and followed it up with a big serve. Ferrer pulled the mini-break back and then made a backhand down-the-line winner of his own.

A Murray ace levelled at 3-3 and his 17th of the match gave him the lead. Still Ferrer went for his shots, making a massive off-forehand winner to stay in touch. But a Murray forehand down the line gave him two match points and his 18th ace finished the job.

It had taken little short of four hours to conclude as tight a contest as most had anticipated, and it took him marginally ahead of Ferrer, 6-5, in their head-to-head.

He will next play Jo-Wilfried Tsonga, who also won in four sets against Philipp Kohlschreiber and a man he knows well. Notably, he beat him in a close final at Queen’s last year.

“Having played Jo quite a lot of times, I know him well. We played a lot in the juniors, so I’ve known him for a long time. Rather than focusing on it being the semi-finals of Wimbledon, I need to focus on it being a match against him, what I do well against him and what’s worked against him in the past.”

Both Tsonga and Murray reached the semis here last year but on that occasion, they played the two top-ranked players in the world and lost. This time, one will certainly reach their first Wimbledon final.