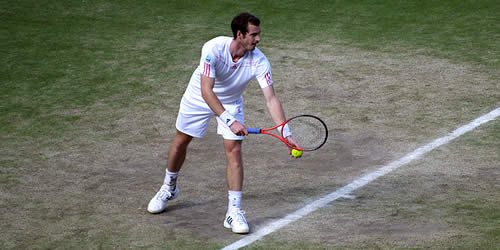 It was official: ‘Murray-mania’ had gripped a nation ready to celebrate a potential champion as London ran headlong towards the biggest sporting event in the world, the Olympics.

The flag-waving, newspaper-headlining support was for an Andy Murray about to play in his fourth successive Wimbledon semi-final. And for a country looking for the first British man to reach the final here since Henry ‘Bunny’ Austin in 1938 and their first British winner since Fred Perry two years before, the signs were almost unbearably good.

Murray had despatched opponent after opponent in what was, by general consensus, the toughest quarter of the draw. The likes of Nikolay Davydenko and Marin Cilic didn’t win a set, and the man who beat him at the French Open, the dangerous David Ferrer, went down in four tight sets in the quarters.

The news got better when Rafael Nadal, who held a 13-5 advantage over Murray, including wins in all three of their Grand Slam meetings last year—and the last two Wimbledon semi-finals—had fallen in the second round. Murray would face, instead, the other losing semi-finalist from last year, the charismatic Jo-Wilfried Tsonga.

And still the news was good. Murray had beaten Tsonga four times out of five, including a tight four-setter in the Wimbledon quarters two years ago as well as on the grass of the Queen’s Club last year—another match that went to the tape.

And the optimism quickly looked well-founded. Murray opened serve safely and then, with the forehand flowing, he worked two break chances in the very first game. It was a backhand winner down the line the closed the door for a 2-0 lead.

Tsonga did not get on the scoreboard until the fourth game and then pressured Murray in the next with a glorious backhand crosscourt winner to bring up two chances to break back. But the Frenchman seemed to struggle with his footing, despite the warm sun beating down through the now-open roof. He slipped and gave Murray the chance to hold. Murray cruised on, relaxed and flowing, to a 6-3 set.

It didn’t stop there. Murray broke in the fifth game of the second set for a 3-2 lead and held his advantage to a 6-4 second set.

Murray opened the third set with a poor game—a double fault and two forehand errors—to give Tsonga three breaks points, and was broken to love.

Lest Murray should forgot, this was the position in which Roger Federer found himself last year, and Tsonga went on to play near-perfect tennis for three sets to take a famous win.

The fifth game, though, brought a plethora of errors from Tsonga but he held, and began to make more successful forays to the net in his characteristic loose style, picking up volleys and advancing to a 5-2 lead.

Tsonga survived a full blow to his body as he served for the set: It took him a while to recover, but he did so, and then survived a lob that landed just long of his baseline. He had one set back, 6-3.

On his opening serve in the fourth, a 32nd error from Tsonga took him perilously close to another break point. He resisted, only to face another on his next serve. Murray fired a forehand winner to break with a roar, but his advantage was short-lived. Tsonga, showing all the flair for which he is famed, hit a running forehand pass, a backhand winner onto the line and a lunging half volley. It earned him a break point, and he took it.

The loss of his lead seemed to galvanise the Murray game. He went after the Tsonga serve with a backhand down the line and earned two break points but yet again, Tsonga sprang into near-superhuman life to save what would almost certainly be match points. He produced his biggest serve—a 137 mph bullet—and chased down a lob, turned and made a winner down the line that Murray dived in vain to reach.

The momentum moved dramatically to Tsonga as a bounding cross-court forehand winner gave him, in turn, two break points. First a Tsonga forehand flew long and then, with the sun suddenly bursting into Tsonga’s eyes, he shanked two balls to give Murray the hold.

Tsonga faced more drama as he served to save the match again. The umpire wrongly overruled a ball on the sideline, forcing Tsonga to play the point again: fortunately he held.

Yet again, at 5-6, he served to save the match but this time went 15-40 down. The drama lasted to the final shot of the match: Murray reached a wide forehand to fire a Djokovic-like cross-court winner. It was challenged but it was in. He had won the match 7-5 and the shell-shocked face of the Scot gave way to discrete tears.

He said afterwards he is planning a quiet night in. “I won’t celebrate. I’ll just enjoy this evening. I’ll go back home, have a nice meal with my girlfriend, and just enjoy it with her and the dogs. That’s it. I’m not going to go out and celebrate tonight.

“At the end of the match it was obviously very emotional. I haven’t really been like that before in a semi-final, so obviously it meant something to me and it was very, very important.”

Murray has been in three Grand Slam finals before, but never on home soil. He has lost each one, and in two, he fell to the man who now faces him, Federer.

It will be an emotional match: Wimbledon’s favourite son, making many doubters eat their words over his chances of reclaiming the No1, versus the man who could bring to an end that 76-year wait for a successor to Fred Perry.

On this occasion, Federer may find the Wimbledon faithful cheering the other man.