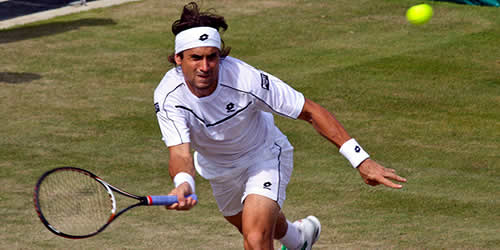 David Ferrer admits he will have to produce his best tennis if he is to beat home favourite Andy Murray in the quarter-final at Wimbledon on Wednesday.

The Spaniard is in fine form, having eased into the last eight with an impressive straight-sets win over Juan Martin del Potro on Tuesday.

Seventh seed Ferrer won his fourth singles title of the year in ‘s-Hertogenbosch in the build-up to Wimbledon following his run to the semi-finals at the French Open, where he was beaten by eventual champion Rafael Nadal.

But the 30-year-old is braced to a tough test against his Scottish opponent, who eased to a straight-sets win over Marin Cilic in the fourth round on Tuesday.

“It’s very difficult to beat Andy on all surfaces, but on a grass court it’s more difficult,” Ferrer said.

“He’s [the] favourite because he’s better than me. I will try to do my best. I will have to play my best tennis to beat him.

“Of course it’s a very important match because it’s the quarter-final of Wimbledon.

“Maybe he has more pressure than me because he’s playing at home. Sometimes it’s not easy. But I think Andy is a great player.”

Wednesday’s order of play at Wimbledon