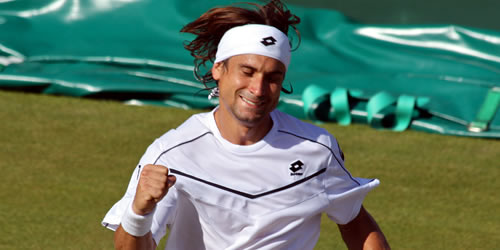 In many ways, the match up between the compact, bustling, coiled spring of David Ferrer and the tall, languorous, slow-but-explosive Juan Martin del Potro was the most intriguing of the fourth-round confrontations in the men’s draw, and the most difficult to predict.

Both former world No4s, the older man has 15 titles and semi-final finishes at Grand Slam level, the younger has 11 titles and is a Grand Slam winner. And while both had reached the quarters of the other three Grand Slams, neither had got beyond this stage at Wimbledon before.

Ferrer led their head-to-head record and, despite his renown on clay where the majority of his titles have been won, it was he rather than the big-serving, big-hitting Argentine who brought success on grass at ‘s-Hertogenbosch in 2008, Ferrer beat del Potro in straights on his way to the title, and he came to Wimbledon this year with the same title in his pocket.

Psychologically, too, Ferrer held the upper hand. A pro on the tour of 12 years’ standing, he has worked his way back to near his best-ever ranking, No5. This year alone, he has won four titles—only Rafael Nadal and Roger Federer have won as many—and his last 18 months have produced the best Grand Slam results of his career, culminating in his first French Open semi-final last month.

But perhaps more significant, Ferrer pulled del Potro back from a two-set deficit in the Davis Cup final last December, and Spain went on to deprive Argentina of the trophy. That was on clay, but he went on to beat del Potro on the hard courts of Miami as well, also in straight sets.

But despite the long and consistently high level of his tennis career—and Wimbledon marks his 39th straight Major appearance—Ferrer has never managed what del Potro did in 2009, when he broke the Roger Federer—Rafael Nadal—Novak Djokovic cartel of Grand Slam titles for the only time in the last 29 Majors. Had he not been sidelined for most of 2010 with a wrist injury, many believe he would already have won more.

The suspense over this one was not helped by a day’s delay due to rain, nor by almost an hour’s delay before a point while the Centre Court roof was closed—also due to rain.

It was not helped, either, by the first game going to 10 minutes and six deuces. Del Potro, though, failed to convert his break chances, and would live to regret it.

The closed roof conveyed very quickly and simply the style of tennis the two were playing: flat, hard ground-strokes that reverberated like sonic booms. But Ferrer was rewarded by the first change of tactics in the fourth game: a drop volley followed by a forehand slotted up the backhand line to make the first break.

A strong hold took him to 4-1, this time with a backhand up the line, and although Del Potro fended off deuce in the sixth by coming to the net himself, Ferrer began to mix up the direction and length of his shots and a wrong-footed Del Potro tumbled in seventh game. Ferrer went on to serve out the game and the set comfortably, 6-3.

The Spaniard began the second set with the same aggressive and determined tennis. He has a big serve for a man of his height and a right forearm built like a sledgehammer. His foot speed is as good as anyone on the tour and that also helped him defend superbly and transition quickly into attack.

Del Potro lacks such flexibility, and by now he also had strapping around his left knee. But no matter how hard he hit his serve and forehand, Ferrer was there. Time and again the Spaniard slotted a winner past a del Potro attempting to take the initiative at the net, and then came in himself to pick off more-than-competent smashes.

Ferrer broke in the fifth game, held to love and converted the first of two more break points in the seventh to lead 5-2. He completed the set with real intent via a text-book swing-volley winner.

In the third, they cranked up the pace still further, both pounding their forehands and making very few unforced errors. But despite some scorching ground-strokes from del Potro, he could only shake his head in bewilderment at some of the plays his opponent was pulling off.

One such saw Ferrer chase down a huge forehand and a clever drop-shot to make a cross-court winner out of nowhere. Del Potro clapped and sighed and hoped for a drop in Ferrer’s level, though in truth, he was doing little wrong.

After an hour and three-quarters, he had made only 13 errors to 33 winners, and he was serving at 75 percent. The problem was, Ferrer, by the end of the match, had made just eight errors and, perhaps even more surprising, had notched up 17 out of 19 net winners.

As they edged through the third set, it was again Ferrer who held serve the more convincingly. And sure enough, he was again the one to break though, in the seventh, forcing del Potro to hit long. The Spaniard, having held serve to love, hustled del Potro right to the line to break in the final game. The match was his in under two hours and in quite stunning style.

He is a modest, unassuming man away from the court: He smiles, shrugs his shoulders, and talks of hard work. But here is a man who has spent almost his entire career in the shadow of compatriot and superstar Nadal, who almost walked from the sport a couple of years ago when the results failed to come. Instead, he hunkered down, worked on a greater range of shots, became more aggressive and even more fit.

The wins and the admirers have followed: He left Centre Court to one of the warmest standing ovations of the week. How he will be received when he walks back on for his quarter-final against home hope Andy Murray is another matter.

But as Murray said after his win, “Ferrer is not a clay-court specialist” despite the Spaniard beating Murray at this stage of the French Open only last month. He added “This year, he’s playing the best tennis of his career.”

He’s not wrong, though Ferrer, with usual self-deprecation, simply said: “He’s the favourite because he’s better than me, and tomorrow I will try to do my best.”

Other men to make it through to the quarters were the two Germans, Philipp Kohlschreiber and Florian Mayer, winners over Brian Baker and Richard Gasquet respectively. For Kohlschreiber, it is his first Grand Slam quarter-final and for Mayer his second: He reached the same stage at his first ever Wimbledon in 2004.