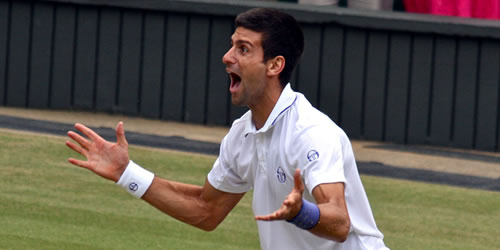 The world No1 and defending champion, Novak Djokovic, will meet six-time titlist, No3 Roger Federer, for the 27th time when they take to court in the first of the 2012 Wimbledon men’s semi-finals—their first ever meeting on grass.

And while Federer has the edge in their head-to-head, 14-12, he has lost six of the seven matches they have played since the beginning of 2011. All those meetings were in semi-finals—except the final of Dubai last year—with the most recent Djokovic win coming in the French Open last month.

The No4 seed, Andy Murray, plays in his fourth successive Wimbledon semi-final and is aiming to become the first British man to reach the final here since Henry ‘Bunny’ Austin in 1938. The last British man to lift the title was Fred Perry two years before.

With the weight of a nation’s hopes and fears on his shoulders, he plays the charismatic No5 seed, Jo-Wilfried Tsonga, a man he has beaten four times out of five, including a tight four-setter in the Wimbledon quarters two years ago and in the final on the grass of the Queen’s Club last year—another match that went to the tape.

Last year, both Murray and Tsonga fell in the semi-finals to Rafael Nadal and Djokovic respectively.

Here are some of the quartet’s thoughts immediately ahead of what promises to be one of the most highly-charged, high-quality days of tennis this year.

Andy Murray, on whether this may be his best chance of reaching the final [in the absence of his expected semi-final opponent Nadal]:
“No. I don’t know. I think when I played Roddick in the semis was also a good chance. I had a good record against him [but] he did play unbelievable in the semis, and especially in the final that year. I’m in a good position, whether it’s the best chance or not, I’m not sure. But I’ve been in this position a few times now and want to push on.”

And whether he is pleased he will face Tsonga instead of Nadal:
“Just because I lost to [Nadal] a few times doesn’t mean I’d never want to play against him. I don’t mind playing against Rafa. I’ve won against him in slams before…But I mean, Jo’s a tough opponent. He served I think very well so far this tournament; he’s one of the best grass-court players in the world, that’s for sure.”

And trying to handle a nation’s expectations:
“If you kind of shield yourself from it all and kind of just get into your own little bubble, only listen to the people that are around you, then it’s something you can deal with…Obviously now I’m not thinking, ‘Great, I’m in the semi-finals.’ You want to try and go further. But I know how hard it is. Everyone kept telling me I had such a hard draw and how tough it was going to be to get through. You know, I managed to do that. I’ve beaten some very good players but I want it to continue. It’s a very difficult thing to do.”

Jo-Wilfried Tsonga, on dealing with the pressure of Murray’s home support:
“That’s all right. I mean, all the year I’m outside [France]. Sometimes I play against a player who have lot of support and I win. I remember at US Open I play against Fish in a tight match. Was not easy, but I won it. So I think for me it’s of course an advantage to play at home. But it’s still tennis, and you never know what’s happen on court.”

On the challenge of playing Murray:
“For me, Andy’s one of the players I don’t like to play because he’s returning really well and he can play some really good passing shots. He’s really quick. He’s all the time on the ball, so is tough for me. But, you know, I beat him once. Yeah, I beat him once. And last time we play together on grass, I had a match point and it was really close. So I will have a chance. I mean, on 100 per cent, I have maybe less than him, but I will have some and I will try to take it.”

Roger Federer, on his relationship with Djokovic:
“Things are cool [meaning ‘OK’ as opposed to ‘chilly’] since a long time between me and him. I’ve always respected him. Have I gone out for dinner with him? No. But had many meetings with him at the council, and then now with the Grand Slams. He’s been nice to work with. We’ve met on several occasions because of other things together. Yeah, I have no issues with him, and I hope you believe me.”

And on the match ahead:
“Obviously I’m aware that Novak is the defending champion and the world
No1. That’s not going to make it easy to come through. That’s the focus now, I know it’s possible, I know I’m playing really well, [but] I am aware things are going to get complicated in the next match. I better prepare well, because it’s going to be a tough match.”

Novak Djokovic on the challenge of playing Federer on grass:
“He has a variety, great variety, in his game, I guess. He uses his serve very well. He opens up the court. He uses that slice really well to get the balls to bounce low. You know, he’s very aggressive at times. He can defend well. I think that grass courts are suiting his style of game the most, so it’s going to be an interesting match.”

And on his own grass-court game:
“You know, [Federer] has a really smart game for this surface. But I improved playing on grass in last couple of years. I mean, I won the title here last year, get to another semi-final this year, so I’m feeling good about this surface, about myself on the court…This year I’ve been playing really well, constantly well, from the start of the tournament, and I hope to continue that.”