Ranking and records are key components when it comes to the big stage in women's tennis, writes Marianne Bevis 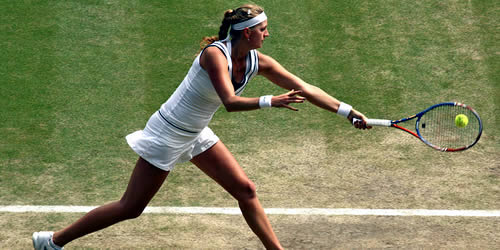 Petra Kvitova is the defending champion at the All England Club Photo: Marianne Bevis

When it came to predictions about who might win Wimbledon’s 2012 titles, there seemed to be one area of common ground.

In the men’s draw, few could see anyone outside the top four reaching the final—indeed most plumped for one of the top two or three. Mea culpa.

On the women’s side, there was a similar consensus. There were, by common consent, any number of seeds—and even the odd non-seed—who could make a run to the title. So the safe money went with the top four but with plenty of provisos and margin notes, just to be on the safe side. Mea maxima culpa

And yet, come the second week, with a complete set of 16 penned into both draws, there is every indication that the top women have consolidated their positions with even more conviction than the men.

The top four are present and correct and six of the top eight are intact. Three more of the expected 16 have also made the cut, and although there are four unseeded women in the line-up, one of them, Kim Clijsters, is a Grand Slam champion who slipped down the playing order due to injury, while another of them, Tamira Paszek, won her first Premier title on Eastbourne’s grass just a week ago to take her within touching distance of the seedings.

And the men? The shock defeat of No2 Rafael Nadal shook up the draw and a lot of predictions, as did the first-round demise of former Wimbledon finalist, No6 Tomas Berdych. A third member of the top eight, Janko Tipsarevic, also fell short and five more of the top 16 are absent—two lost in the first round.

Upsets, of course, have a drama all of their own, and new talents bursting into the spotlight of a Grand Slam bring with them some welcome variety and unpredictability. Lukas Rosol has probably never experienced such interest in his tennis, his background and his personality as he did after beating Nadal.

But what the women, as much as the men, have shown this week is that experience, ranking and records are key components when it comes to the big stage.

Seven of the 16 have, between them, won 25 titles from 37 Grand Slam finals. Five of them are former No1s. Four of them made up last year’s Wimbledon semi-finals and three of them have won Wimbledon before. There are, in fact, no more surprises here than with the men.

Among the women, too, there has been some truly serene progress by a handful. The biggest name and most successful champion, Serena Williams, may have hit a record 23 aces in her third-round marathon win, and Ana Ivanovic may have made just 14 errors in her three-set victory over fellow beauty, Julia Goerges, but eight others have made their way to second Monday without dropping a set—and six without facing a tie-break either.

Just one man has managed the same, and he was not one of the favourites for the title: Richard Gasquet.

Unseeded Clijsters is playing her last Wimbledon and aiming to win her first. Twice she has reached the semis and twice more the quarters and considering she has played only four other tournaments this year, she has hit the grass running.

It’s all the more impressive because, unlike the other four women to get this far without facing a tie-break or losing a set, she has played two seeds: No21 Jelena Jankovic in the first round and No12 Vera Zvonareva, twice a Grand Slam runner-up, in the third. The Russian retired in the second set, but Clijsters was already a set to the good.

The Belgian faces another of the five to lose no sets and face no tie-breaks, the fast-rising Angelique Kerber, who joined the top-10 this spring and continued her rise to No8 in June. She was a finalist in Eastbourne before Wimbledon, too, to consolidate her threat on grass.

Agnieszka Radwanska, world No3, manages to look serene whether she is winning or losing, but she has done a lot more of the former in the last year. She has claimed five titles since the US Open, three of them Premiers, to take her to her present career high. She is also one of only two women to lose just 11 games so far—the final pair in under an hour apiece. She’s no slouch at SW19, either: twice a singles quarter-finalist.

She is now the highest seed in her quarter and knows that her bête noir, Victoria Azarenka, is in the other half of the draw: Radwanska has lost to the No2 seed in all six meetings so far this year.

The immediate challenge for the Pole, though, happens to be the other woman with just 11 dropped games to her name, Maria Kirilenko. The Russian, too, has just reached a career-high ranking, currently 17, but has a losing record against the intelligent game of Radwanska.

The only others to retain the special distinction of a clean slate in sets and tie-breaks are arguably the strongest contenders for the Wimbledon title.

Victoria Azarenka and Petra Kvitova are tall women with powerful games, both broke the Grand Slam inner circle for the first time in the last 12 months, and both have subsequently carried the burden of being the ‘next best thing’ in the women’s game.

Azarenka came close to reaching the Wimbledon final and winning the WTA Championships last year, falling to Kvitova on both occasions.

This year, though, Azarenka has won four titles and 41 matches, and took the Australian Open and the No1 ranking. She knows, though, that the woman who was her downfall here last year may await her in the semis. Each has dropped only 13 games so far but each next faces a Grand Slam champion.

Azarenka plays a woman with three Grand Slam finals and the French Open title to her name, a resurgent Ivanovic, while Kvitova plays the unpredictable veteran with the longest run of Grand Slams to her name, Francesca Schiavone. The Italian has reached two French Open finals, winning in 2010, but she has been a quarter-finalist at Wimbledon, too.

Nevertheless, it is Kvitova and Azarenka who could be emerging from amongst all these high-achievers with the timeliest of form. Certainly Martina Navratilova thought so in an interview for the Laureus Foundation ahead of the Championships.

“I think Azarenka is going to come out of the gates. She will be pretty upset about how things were in Paris but she should like the grass and become more athletic in how she plays the game on the surface. It should suit her pretty nicely. And she only lost last year to Petra in the semi-final. It was the closest match.”

It transpires, though, that Navratilova helped out her fellow Czech ahead of last year’s tournament, as Kvitova revealed to Laureus: “I had a good chat with her at Wimbledon. She had some advice for me. She has a lot of experience and she is very smart.” What did she say? “It’s a secret. I’m not going to tell anyone.”

But judging from Navratilova’s assessment of the No4 seed’s chances this year, the advice is clear: “Petra does play an attacking game.

“She is very forceful from the base line of course, and when there is an opportunity to come to the net, she does so more than Sharapova or even Serena Williams. I would still like to see her more aggressive. It is always a matter of missing or making the shots. If she makes them she could on a given day beat anybody.”

The holder of more Wimbledon singles titles than anyone else was quick to mention the dangers of the two former champions, of course.

For the comeback of Maria Sharapova, Navratilova was full of praise: “It is an amazing accomplishment physically and mentally.

“It is one thing to rehab your shoulder, but to overcome the mental obstacles where she had issues with her service motion, with the technique—well, she stuck with it and now she is back to No1. It is an amazing story, so if she stays healthy, there is no telling how much she can win.”

But about the one named “serene”, Navratilova had a warning to those other champions taking up arms in the last 16: “Serena Williams has a winning record with everybody, so if Serena gets through the first week, and if she is healthy, I think she is the person to beat.

“She has got the biggest serve in the game and her confidence will grow as she progresses. So, unless she loses early, I think she is going to be the person to watch out for the most.”